In a tragic mishap at Mikirbheta in Morigaon district at least 30 persons were injured, leaving seven of them in a serious condition. According to the information, the mini bus loaded with a large number of passengers turned turtle and plunged into a pond at around 8.45 on August 28. The injured have been admitted to Morigaon Civil Hospital.

27 Jul 2007 - 7:48am | editor
Haflong: Fierce fighting broke out between the Black Widow extremists and security personnel in Semkhor near Maibong around 44 Kilometers from Halflong on Thursday. The 72 field regiment and the... 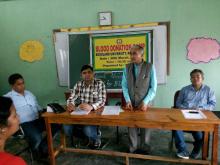