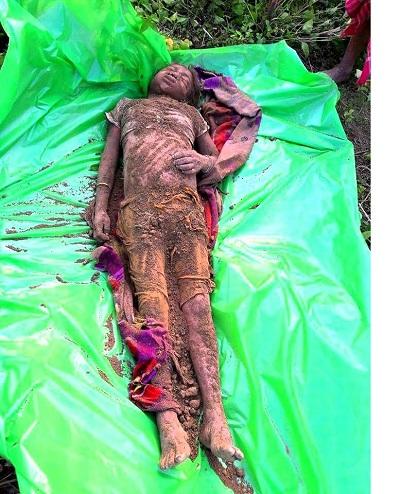 The northern parts of Udalguri district bordering Bhutan have been badly hit by social menaces like witch hunting,child marriage, illegal trafficking of woman and girls etc for years.Taking advantages of illiteracy and poverty, anti social elements operating from outside states could easily appoint locals to lure girls and woman to move to other states, mostly to Haryana, Delhi, Gujrat,Mumbai etc.Unfortunately,neither government nor social NGOs, not to speak of tea garden managements had ever taken any step for stopping these menaces in Udalguri district.

The role of tea gardens and police had always been negative to curb the menaces.Such an incident of death of a widow has come to light recently at Hattigarh tea garden in Udalguri district.One Bina Behra (45) a widow living in Khoirajungle village with her six years old son was found dead on her bed on April 27 morning. Thinking this to be a case of natural death,villagers burried her body in the evening on April 27.Police was not informed and postmortem was not done too.

Next day on April 28,the six year son revealed to the villagers that he had seen one Gauranga Mantra (37) fighting with her mother in bed the previous night.The revelation alerted the family members and villagers as the said Gauranga had been a notorious trafficker of girl and woman,working as agent of a Delhi based employment company.Gauranga's wife too was found dead in a burning case four years back.But the matter was never reported to police.The family members on the basis of statement of the minor son filed FIR in Paneri police station on April 28 and Gauranga was apprehended immediately.Police removed the dead body from the grave for postmortem.

DN Hazarika,ADC, Udalguri visited the site on April 29 to meet family members and villagers. Noted social worker of Udalguri district,Ranjit Tanti,now the principal of Bright Star English School, Hattigarh alleges that law and order situation in Udalguri district had not been never satisfactory, massive awareness programme must be launched by government,political parties,tea garden managements and students organizations against illegal trafficking,witch hunting,child marriage etc.Tanti said that because of the free availability of alcohol ( country made or IMFL ) in the villages in and around Hattigarh and poverty most of the youths have easily been lured by anti social elements.He requested all to arrange good counselling for the boys and girls of the tea garden villages.

8 Jan 2018 - 12:23pm | AT News
DIBRUGARH:  Floral Fashion Show has drawn no less response when it was organised I Dibrugarh first of its kind in the state. Held under the guidance of Nasima Begum Lahkar at Chowkidingee...