Over three thousand supporter and activists from Goria Moria Deshi community from different districts joined hands with banner,placards and shouted slogans demanded uplift of as well as include the community in ST status in the state. A grand rally was a carried out in connection with Satyagraha,which was started from Rashmela ground traversed to RNB Road,DC office Road,Santinagar Vivekananda Path,fly over and ended at the same point.

A memorandum was submittted to Chief Minister of Assa through the Deputy Commissioner,Kokrajhar seeking satellite autonomous council for the Goria Moria Deshi community,inclusion into ST status to gain economically upliftment in the state.

Hafijul Ahmed,president of the parishad said that the Goria Moria Deshi community arprived from all develomental as pects in the state due to insincerity from government.He has claimed that the community is the aboriginal indigenous community of the state,but they are still under backward in the state.He has demanded governmnt should comhe welfare of the community.

Azijul Rahman,secretary of the parishad demanded creation of satellite autonomous council to pave e development to the community.

14 held for shoot out

20 Jan 2014 - 12:50pm | AT News
Police have picked up altogether 14 people in connection with the Ramphalbeel shoot out where 5 people were killed and two others injured on Saturday night.According to information, these were...

18 Feb 2014 - 10:30pm | AT News
Senior AASU leader Rituparna Baruah on Tuesday joined BJP a day after he quit the student leader.Baruah, the central committee member joined the party at a meeting in presence of state unit president... 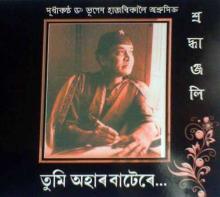