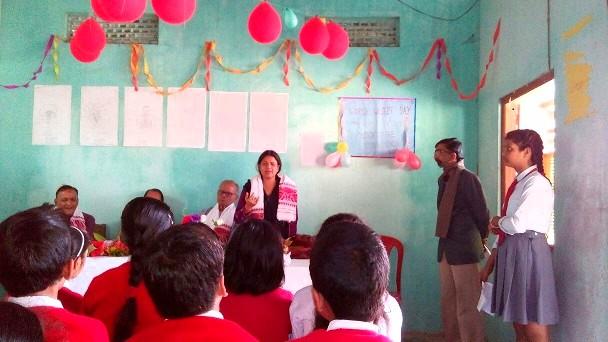 “The dolphin’s position is same in the river ecosystem as a tiger in a forest.Declared Assam’s State Aquatic Animal in 2008,the Gangetic River Dolphin went on to become the National Aquatic Animal a year later. An online vote made it the City Animal of Guwahati recently.Unfortunately, the bid is yet to show results in its conservation.The threat on their existence continues to loom large unless their habitats are secured.This was the observation made by Mubina Akhtar, secretary, Kaziranga Wildlife Society during the observation of World Wildlife Day on March 3, organized by the Rising Sun English School, Kohora, Kaziranga at the school premises.

Initiating the deliberations,KWS secretary Akhtar said that if we need to go for aggressive protective measures for wildlife,then we must involve the younger generation as they were the ones who can take creative measures for wildlife protection.Impressed with the deliberation of important topics like diversity of aquatic animals of North East India, biodiversity of Assam, wetland of Assam and the avifauna of the sub-Himalayan region, spelled out by Dona Das, Nitin Dutta, Ankita Bora and Udipta Akash Das respectively, the KWS secretary expressed her happiness with the way these students had come forward to discuss about important environmental issues which had become the matter of concern for everyone.

“Given that a quarter of the world’s population is aged between 10 and 24,this year’s theme‘Listen to the Young Voices’,puts the onus on the younger generation,what they think and say about wildlife protection.While Conservation education is vital to wildlife protection, the same is lacking in the mainstream society,in our day-to-day talks.Conservation talks in most urban house-holds are confined to calendars,t-shirts and computer screens where they are sterile and dead.It is really painful to see forests and wildlife have acquired negative connotation for the urban population due to sheer disconnect,” she said and added that more matured conversation is needed for conservation.Sharing his experience,a former director of the Soil Conservation Department, Indrajit Dutta said that course material of the other countries were made in such a way that it had many subjects concerning environmental issues which motivated the young generation to become responsible stakeholders for the conservation of nature and wildlife.

President of the Rising Sun School committee, Dilip Das said that people of Kaziranga, especially the young generation had become responsible stakeholders in protection of wildlife surrounding their places of living and were playing an active role during floods while rescuing animals.Padum Borthakur of the KWS said that students should develop reading habits to acquire knowledge on wildlife.

31 Jan 2012 - 3:25pm | editor
Three persons died when a Tata Magic vehicle collided its head on a truck in Barpeta district on Monday. The accident took place at Simalaguri at around 9 in the evening where three persons died...

7 Mar 2011 - 11:23pm | AT News
A full bench if the Election Commission is in Guwahati on a 2 day visit to Assam. led by Chief Election Commissioner, S.Y. Quraishi, the delegation met the political leaders and poll officialos to...