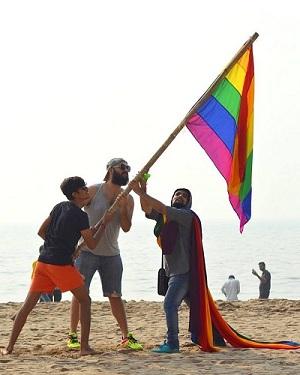 How is ‘Pride’ such a pride for some or rather a very few of us? There is always much ado about everything. Within the realm of everything, pride of bruised souls, bodies and minds was somewhere lost in the crowd. Such loss was never noticed, addressed or heard with sensitivity but ridiculed with negativity, violence and torturous upturns within both personal and public spheres. Wonder why people are always concerned about the straight flow of nature. Sometimes they flow with the norms to avoid any form of complexity and confusion. People are wired and transmitted into a world which is either/or, this or that, here or there, for or against, yours or mine, us and them and even more precisely right or wrong.

Stories of pride run through layers of multiplicities. They are beyond the comprehension of just being a part of a whole or rather a whole within a part. Pride is aggressive when it is rooted in jealousy and ego centrism but pride is crucial for ensuring human dignity. In the context of India pride is the key to the dalit, adivasi, disabled, hijra, prostituted minors, ex-communicated individuals and any non-conformist whose identity, ethnicity, religion, colour, status and sexuality define everything around the individual. Pride is a celebration of vibrancy, diversity and disassociation for the normative rigidities.

In a world constantly struggling with its layered existence needs to either belong or become the insignificant other in the pursuit of justice, equality and freedom, Queer Pride holds the ground for alternatives. It is not about being, becoming or belonging to the airtight containers or gender binaries or those queering such binaries but more so the move beyond such identity constructions which relieves an individual from every kind of oppression and restricted living. Youth celebrates pride in many countries across the world and even in Guwahati in the past four years Pride was spearheaded by the youth and the matured to be precise. But age is indeed a state of mind. Every stage of life relates to the contours of Pride to be able to embrace it completely.

Sexuality is a concern for many and sometimes it is also a gender expression. Pride celebrates gender expression and diversity within which such expressions are recognised and reflected within the broad spectrum of gender identity formations. Pride empowers people to bring out their intimate, closeted and most vulnerable gender experiences within the public space. Whether individuals or groups are concerned about public, political or professional issues, pride enables people to engage with their own inhibitions vis-a-vis others and also accept the differences with dignity and power.

Guwahati Queer Pride is an effort towards the expression of such diversity enabling every individual and group with choices. Choice is a matter of pride in today’s shrinking world. Choices are pre-determined, destined or manipulated as per the dominant world-view. But queer pride entails an opportunities for individuals and groups to explore the possibilities of dissolving the rigid constructs which constantly leads to conflicting paradigms.

22 Jan 2018 - 8:20am | AT News
MARGHERITA: The three days biannual session of the Margherita Journalists Union in Tinsukia district concluded on Sunday with an open session attended by local legislator Bhaskar Sarma in Maulung.The...

8 Mar 2014 - 9:06pm | AT News
Union ministers Pawan Singh Ghatowar and Ranee Narah will contest from Dibrugarh and Lakhimpur respectively in the upcoming Lok Sabha polls.This was what AICC formally announced on Saturday. The...