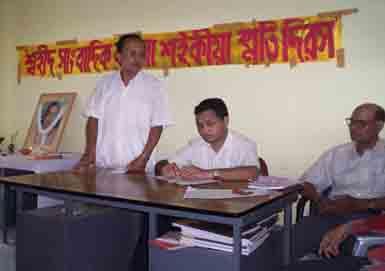 A seminar titled “How safe is journalism in Assam” was held on 9th August at Golaghat Press Club in memory of late journalist Kamala Saikia. The seminar was presided over by Sri Devojit Phukan, vice-president of Golaghat District Journalist Association. Speaking on the occasion noted journalist Sri Keshab Saikia said that political leaders of our country always try to keep the journalist fraternity in their grip. If any one tries to break away from their clutch then they were threatened. He said that journalist community in Assam is not safe in these days. He further told that contrary to the present scenario journalism was much safer during the pre-independence period. Senior journalist Sri Upen Dutta, General secretary of Golaghat district students union Sri Parikhit Dutta, Assistant secretary of AISF Golaghat unit Sri Santosh Kumar Sandalya etc. also expressed their views and opinions in the seminar. A decision demanding immediate arrest and punishment of the killers of late journalist Kamala Saikia was also taken unanimously.

2 Aug 2015 - 7:51am | Dibya J Borthakur
Hundreds of bikers hit the streets in Raha on Saturday demanding the proposed AIIMS hardly a month after Dispur gave the Centre the green signal to set up it in North Guwahati.  Thousands of...

6 Dec 2010 - 8:22pm | Mubina Akhtar
Women of Assam weave dreams in their looms... We very often echo Gandhiji’s famous line when we talk of our age-old, indigenous silk fabric of Assam. The golden thread, which is one of the strongest...