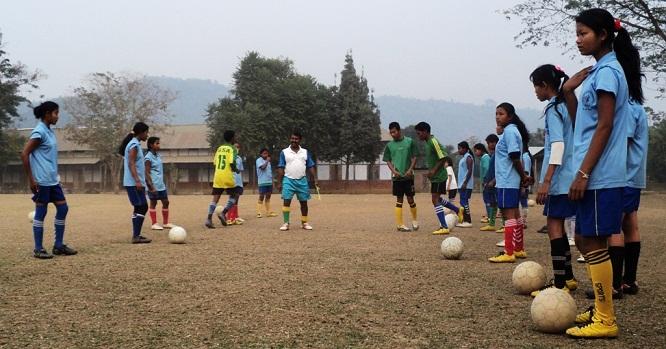 Dulumoni Rabha’s mother and brother work in stone quarries to make ends meet. Nikumoni Kalita’s father digs sand from the river to earn his family’s household expenses. Popy Rabha’s mother pulls a hand cart, sells snack in the weekly local market so that her family can have their next meal.

Apart from abject poverty, there is another point that binds these girls in Assam’s Rani area along the state’s borders with Meghalaya – they are looking at football to take them out of their drudgery. And they have to thank Hem Das, veteran coach from Guwahati, who spends his own money to teach football around 40 girls like them.

Now, even as the world is celebrating the FIFA World Cup fever, their story has come alive in a documentary by film critic-cum-filmmaker Utpal Borpujari, made for Rajya Sabha Television. The 26-minute film was commissioned by RSTV channel as part of a series on developmental and aspirational stories of modern India.

In a sense, it is a real-life “Bend It Like Beckham” story, in that it is also about the passion among some girls to play football. But the similarity ends there.

The girls of Rani come from poor, agrarian families from villages in the Rani area, which despite not being very far from Guwahati, still remains so backward that quite a few villages in this tribal-dominated region do not have access to power supply even today.

“For these girls, football provides an outlet to go beyond their mundane lives, and as the film reveals, quite a few of them also see it as an opportunity to get a better life in the future.  They walk or cycle several kilometres every day to practice football, which speaks volumes about their dedication. And they practice football in time they find after attending school and doing household chores,” says Borpujari. 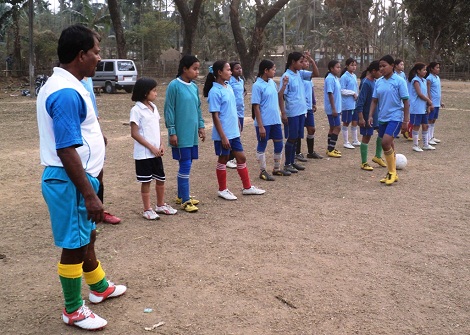 The film, says the director, is also about the dedication of Das, an ex-Assam player who runs the Young Star Football Coaching Club in Guwahati.

“There are many coaches who are as dedicated as Das towards the game, but what made the story interesting for me is the fact that he spends a major portion of his earnings in going about 20 days a month to Rani to teach football to these girls, and even buying kits for them,” says Borpujari, whose documentaries “Mayong: Myth/Reality” and “Songs of the Blue Hills” have earned international acclaim.

“The film, apart from focusing on the story of aspirations of a bunch of young, underprivileged citizens of modern India, also focuss on how individuals can play a role in giving shape to the nation’s future, even if in small ways,” he says.

The research work for the film was done by Guwahati-based journalist Abdul Gani, while cinematography is by Biswajeet Changmai, editing by Umesh Kumar and music by Anhad Imaan & team. The executive producer of the film is Jayanta Goswami, the producer of “Mayong: Myth/Reality” and National Award-winning feature film “Mon Jaai”.

What makes the subject really interesting is the fact that Das had initially gone to the area in search of young boys interested in playing football, but he found that instead of boys, more girls were flocking to him to learn the sport.

While telling the stories of the girls, the film also captures the socio-economic life of the area they come from, thereby trying to show how fruits of modern development have not been equitably reached all the people.

The film’s subject is also important in the context of North-East India, where football is a passion and states like Manipur and Mizoram and clubs like Shillong Lajong FC have proved themselves to be major players in the national scene.

15 Apr 2010 - 12:57pm | Daya Nath Singh
The BJP detractors, the four Members of Assam Legislative Assembly, who defied the party whip during recent Rajya Sabha elections and cast their votes in favor of the candidates of Congress Party...

31 Jan 2016 - 6:06pm | Shajid Khan
A 21 year old youth was arrested for allegedly killing a minor girl at Tarajuli village under Rowta PS in Udalguri district. The body of 16 year old victim has been identified as that of Bimla Devi...

5 Jan 2008 - 3:17am | Daya Nath Singh
The Central government is giving top priority to the development of the Northeastern region, as this region continues to be backward in comparison to other parts of the country even after sixty years...