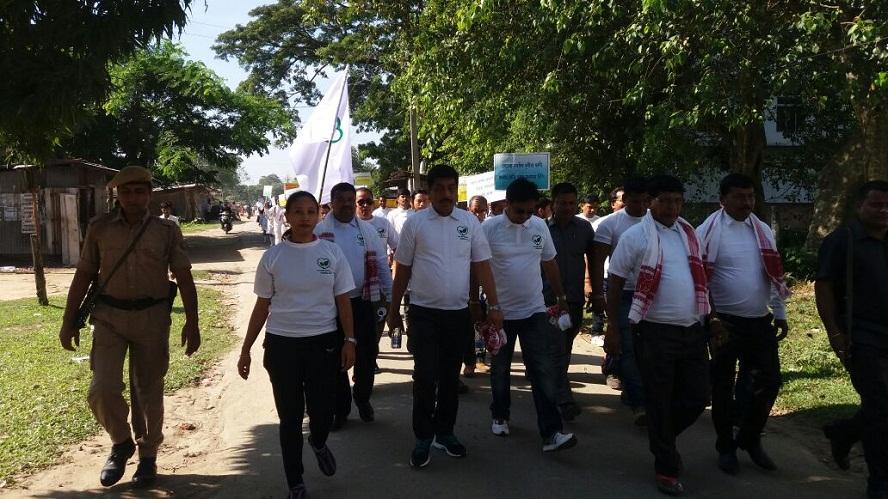 After paying floral tributes to the great leader, the administration took out a Run for Unity event in the morning. A large number of people of the town from different backgrounds, school students, Raha Revenue circle office staffs, RTC officials, Raha Bikers’ Association members and police personnel took part in the run which was flagged off by Dimbeswar Das, MLA, Raha.

Prior to a public meeting held on the occasion at Sudhakantha Dr. Bhupen Hazarika Khetra, a plantation programme was also carried out by the organizers in the line of ‘ Swachh Bharat Mission’  with  the theme ‘ Clean Raha- Green Raha ’

Apart from the local MLA, the public meeting held on the occasion was attended by Dipankar Das, ADC, Nagaon, Pallavi Kachary , Circle officer, Raha, Pranab Kumar Sharma, CEO, Nagaon Zila Parishad and Babul Saikia,SO, PHE, Raha. The local MLA in his speech urged all to follow the ideals of the great leader.

The CEO dwelt at length about the importance of observance of Rastriya Ekta Divas in connection with celebration of birth anniversary of Sardar Vallabhbhai Patel.

Pallavi Kachary in her speech appealed the  gathering crowd to maintain the unity and integrity of the country. She also offered vote of thanks to all present on the occasion.

At the end of the programme a signature campaign to make Raha clean and Green with every possible effort was launched. To spread awareness among people about cleanliness leaflets were also distributed on the occasion. Besides the invited guests and dignitaries, a good number of people of the town participated in the celebration.

28 May 2010 - 11:48am | sankal
Showing a noble gesture to the society, the All Assam Students Union (AASU) has decided to provide helping hand to those meritorious students, who topped in the recently declared Board exams and...

18 Apr 2009 - 11:47am | editor
Congress fire brand and health minister Dr Himanta Biswa Sarma has dropped a bombshell against AGP as he was speaking at a press conference in Guwahati on Saturday disclosing that two senior AGP...