Two students from Mancachar have gone missing from South-West Garo hills in Meghalaya sending sensation along the Assam-Meghalaya interstate border.

Identified as Liaquot Ali and Mesadur Rahman, the students hailing from Jingal area in Mancachar area were on a visit to Balapara on a bike. Five armed miscreants allegedly took the duo to their hostage and vanished.

Search operation is going on. But there is no trace of the students.

The incident took place hardly ten days after armed miscreants kidnapped two drives from Chandguri area who have yet to be rescued triggering protest in Mancachar.

11 Dec 2017 - 10:44pm | Mithun Baruah
TINSUKIA: After a brief silence Tinsukia erupts in violence where suspected ULFA-I rebels killed a villager and his son on Monday. The incident took place near Bordumsa where a group of armed rebels... 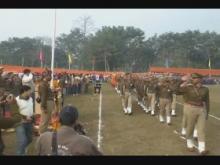 26 Jan 2012 - 8:55pm | Anup Arandhara
The 63rd republic day is celebrated at Nazira by the administration and the Assam Asset, ONGC. In Assam Asset ONGC, the Executive director of Assam Asset, Bikash Kumar Barua hoisted the national...

7 Nov 2017 - 8:25am | AT Kokrajhar Bureau
A road construction worker died and two others sustained serious injury when the rope of the crane engaged in the work breached at Musolpur in Bagsa district on Monday.  The incident took...