Fast emerging to the forefront of Tangkhul filmdom, Meiphung Production (MP) Friday celebrated its first anniversary as a reliable wellspring of innovation and creativity for making quality contemporary Tangkhul feature films. The milestone came after MP team scored a box office success of its debut film “Kha Yurna Mataimei”, which was premiered in five metro cities across India recently and amidst the shooting for its second production “Thotkha Mirin Khani”.

Celebrated on the theme “One year of God's faithfulness” at its office located at Hamleik-hong, the event drew a host of personalities including Ukhrul ADC members Isaac, Themre-ishang and Kapangpam Zimik and film artistes, church elders, social leaders and others.

CEO of Meiphung Production Aning Ruivah said : “We have endured a year in the faithfulness of our Lord and we are happy to celebrate our first year anniversary today."

He said that the firm is committed to nurturing the young Tangkhul talents through produc-tion of quality films and stressed the need for realizing rich culture, potential and resources of the community.

Elaborating on the motto "Semkasa Ithot" (Let's build our generation), he said that in the present fast paced era, youngsters have to grab every opportunity that comes their way to build a better generation.

Highlighting its achievements, Ruivah said that the first ac-complishment of MP team has been establishment of its own office in Ukhrul town which serves as centre for gener-ation of jobs, creativity and innovation and interaction among youngsters.

"In the course of one year, we have been able to employ 5 youth as regular staff including costume designer, web designer and legal advisor," he said.

Attributing sustenance of the firm to cooperation of the the public, Ruivah appealed all to continue with the same support to MP team in its future endeavours.

Speaking to media persons on the sideline of the function, Riyo Varam, Film Project Di-rector of Meiphung Production informed that the second film is projected to have higher quality in terms of plot, tech-nology and with bigger bud-get.

Moderated by Phungmila Ruivah of MP, the event also witnessed a short visual re-view of the first project.

16 Sep 2015 - 8:58pm | AT News
Minister of State for External Affairs VK Singh strongly criticized the stiff protest against the move to regularize the non-Muslim Pakistani and Bangladeshi immigrants.Addressing a press conference... 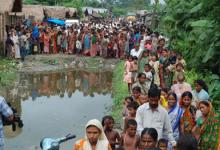 12 Aug 2008 - 1:33am | editor
Illegal Bangladeshis have been seen evacuated by the All Assam Student Union, Dibrugarh Unit in an eviction drive at Paltan Bazar, Chanmari Ghat in Dibrugarh on 11-08-08. PHOTO: UB PHOTOS.