13 Apr 2013 - 9:37am | Anup Biswas
In its continuing effort to increase people – Army interaction and promote co-ordination and cooperation between different tribes of Hajadisa area of Dima Hasao district an Inter village Football...

3 Nov 2011 - 1:57pm | brahma2011
The Ananda Ram Baruah Award for the year 2011 has been presented to 299 meritorious students in Karbi Anglong district on Wednesday in a function held at Diphu Club Hall by Education department,... 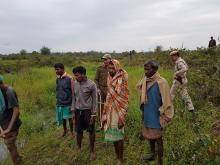