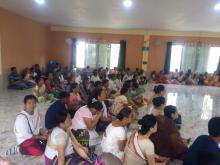 9 Aug 2020 - 6:59am | AT News Imphal
Imphal: The Centre for Research and Advocacy, Manipur (CRA) extends warm greetings to all the indigenous peoples in Manipur and beyond on World's Indigenous Peoples Day on 9th August 2020. At...