A wildfire atop a hillock seems to have been posing a serious threat to huge area in the outskirt of Guwahati these days.

Panic starts gripping the local residents in North Guwahati after the outbreak of a wildfire atop the Dolgovinda hill near the historic Ashwaklanta.

Fire fighters have been deployed on the foothills to bring the situation under control. But of no avail. This is what spreading panic among the local residents in the area.

The fire seems to have been spreading into the residential areas a week after fire was spotted on hills.

3 May 2009 - 7:59am | Jayanta Kumar Das
Integrated Rural Development Organization (IRADO),a NE based voluntary organization has launched a campaign in Darrang district for improving the standard of livelihood of rural woman artisans,... 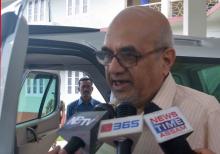 24 Jul 2016 - 6:13pm | AT News
More rains might compound the flood fury in the next couple of weeks in Assam. The famed Kaziranga National Park, Pobitora wildlife Sanctuary have been reeling under waters fetching brimful misery...