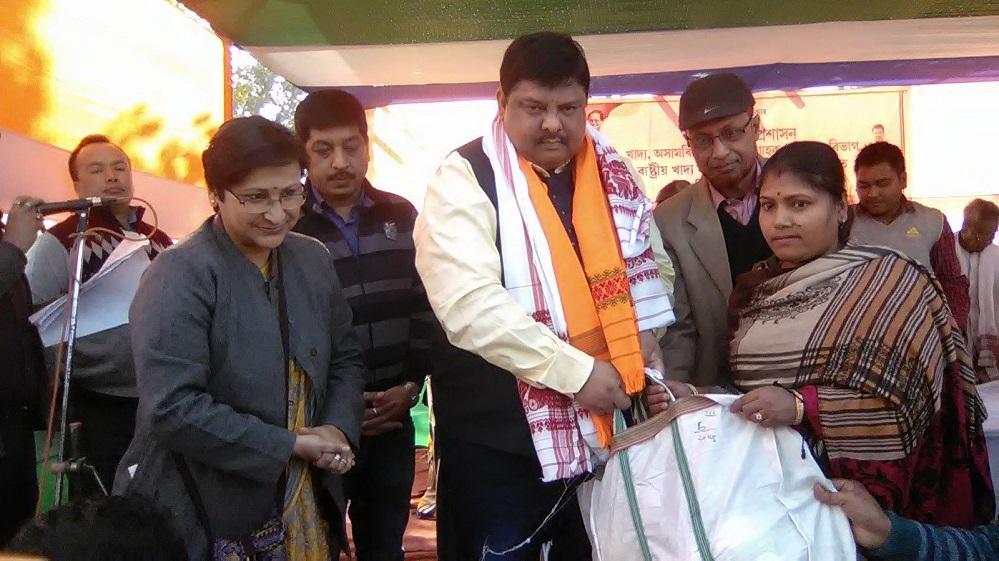 Panchayat and Rural development minster of the state Rakibul Hussain launched the Food Security Act (FSA) in Nagaon district on Saturday. Accordingly, every person belonging to priority households will be entitled to receive 5 kg of food grains per person per month at subsidised prices not exceeding Rs. 3.00 per kg for rice.

National Food Security Act (NFSA) is an Act to provide food and nutritional security in human life cycle approach by ensuring access to adequate quantity of quality food at affordable prices for people to live with dignity. Under NFSA, 2013, a total of 2 crores 11 lakh 69 thousands has been identified as priority households in the State of Assam and 22 lakhs 65 thousands 136 household in Nagaon district will be benefitted by the scheme .

At the launch of the scheme, held at Raha Block Development office premises , the minister and other dignitaries handed over the rice to 11 beneficiaries.

Speaking at the launch, Rakibul Hussain called for better work culture within the district to ensure better implementation of projects. “If government employees work in the right spirit, then the implementation of the programme will be in right earnest and benefit the people,” said the minister while launching the districtwide National Food Security Act, 2013 (NFSA) and National Food Security Mission at Raha organised by Nagaon district food and civil supply department.

The minister also stated that the delay in the launch of the Act in the state was due to many factors. “We wanted to reach out to the most needy based on the socio-economic census. After due diligence, the process was completed to benefit the people. We have incorporated every section of the society and the people, who are entitled to benefit as mandated in the programme”.

The program according to the minister is inclusive and is set to benefit those that really need help. “The programme will address the hunger of the people. It was a challenging task but we did it. Now the onus lies on the rightful implementation of the programme,” he said.

7 Sep 2012 - 1:35am | editor
Atleast 20 people have been injured when ULFA exploded a powerful grenade in Tinsukia. The incident took place at 7 in the evening in Doomdoma where ULFA militants lobbed the powerful grenade at a...

One horn terror in Nagaon

28 Feb 2014 - 9:28am | AT News
Once again one horn terror seems to have gripped Nagaon. A rhino that strayed from the Kaziranga National park creates no less panic among the local residents in Kaliabor on Friday.Villagers spotted...