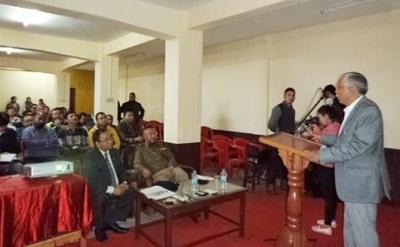 An awareness campaign on Cyber Frauds relating to Banking was organised by the East Khasi Hills District Police at Sadar Police Station, Shillong in collaboration with Reserve Bank of India on Monday. In the programme, more than 100 (one hundred) participants including Police Officers, Businessmen, Teachers/ Professors of various Schools/Collages and members of Civil Society from different profession, attended the programme. Shri B.B.Sangma Director, IIBM (Indian Institute of Bank Management) Guwahati and Shri Amarnath General Manager/OIC, RBI Shillong as a Resource Person gave awareness to the participants on Cyber Crime and Fraud, highlighting the types of financial/ ATM frauds, its Modes Operandis and ways of preventing them.

20 Jul 2015 - 9:25am | Jintul Talukdar
Bajali AJYCP unit felicitated 30 HS and HSLC pass outs at a function encouraging the student fraternity in the entire are on Sunday.Presided over by Mridul Talukdar, the function at Puthimari LP...

Key demands on the cards

3 Sep 2015 - 10:41pm | AT News
A huge gathering of the highlanders in Manipur has raised three key demands on Thursday. The public meeting asked the hills side MLAs to resign apart from creation of independent administration...

14 Mar 2017 - 5:34pm | AT News
Despite counter insurgency operations, ULFA(I) rebels have been moving without any hindrance in many parts of the state. Security forces claimed to have held 3 dreaded hardcore ULFA (I) rebels in...