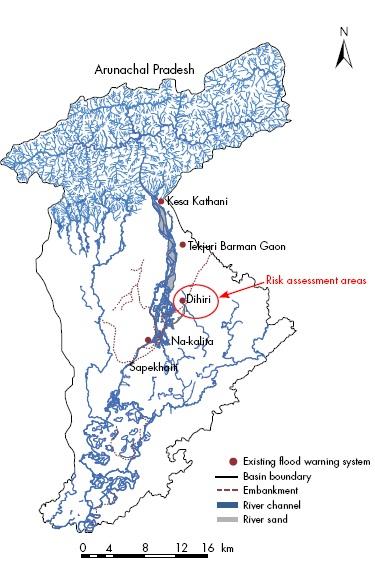 The flood ravaged people living on the bank of River Jiadhal have dissented the alignment of Jiadhal embankment proposed by the Water Resource Department, Dhemaji.

The ambitious plan with an estimate of Rs. 515 crore aims to set up a new embankment from the foothills of Arunachal Pradesh to Gurathali Chapori.

Jiadhal Nadi Baan Pratirudhi Aikya Mancha, a community organization of Jiadhal basin has expressed its apprehension over the alignment of the proposal.  The disturbance accelerated when a news report in a leading Assamese daily informed of Sumitra Doley Patir’s patronage to the disputed alignment.

Dhemaji WRD has a long history of using Jiadhal river as a treasure box. In 1983-84, a sum of Rs 38,28,000 was sanctioned for 5 km extension of an existing embankment on Jiadhal basin in phase one and in the following years, Rs 49,84,200 was sanctioned for a 4.965 km extension in its second phase. The sanctioned grant for second phase was totally vaporized producing fake bills, and the extended embankment existed only in paper.

In 2006-07, the Chief Minister inaugurated the same embankment which was now newly extended to 9.5 km using 15 crores granted from North Eastern Council.

The Dhemaji WRD and the assigned contractors made excuses of non-payment of advance sum and no stone spur was installed, leaving the embankment exposed to flood. Consequently, a one km portion of the embankment was washed away in the same year. Flood water of Jiadhal flowing through this breached portion spelled disasters in the villages of Jiadhal, Chamarajan and Pachim Dhemaji panchayats in the following years.

Later, an estimate of Rupees five crore was prepared to repair 400m portion of the embankment breached in 22/08/14 near Barman Gaon. The target was to divert the course of the river through channel cutting and installing coffer dam. A sum of one crore was misused in the project, the coffer dam remained incomplete and above all, it failed to regulate the swelling water. No work under different sections of this scheme has been completed till date. As a follow up, a plan of Rs80 lakhs was prepared for maintenance and repairing of this section during monsoon. 105 nos of bamboo porcupine were installed under this scheme.

The community protested over the channel cutting work and the location of coffer dam when Sumitra Doley Patir, the Dhemaji MLA came to inaugurate the half completed project on 15/03/15. The community leaders were invited to the circuit house to discuss over the issue. Later, the MLA informed the community leaders of handing over the responsibility of this dialogue to the Deputy Commissioner, Dhemaji. JNBPAM decried that people will not forget this deception and will answer the MLA in the next coming election.

The community has demanded to effectively repair the portion of the existing embankment breached in 2007 instead of setting up the much debated new embankment.

The proposed new embankment, if installed, will make 300 families of 9 villages from 2 panchayats vulnerable to flood havoc. This embankment will change the course of the river, and the river will directly hit the exposed villages like Tengapur, Nepali Khuti, Kopahtoli, Changmai Doloni and Garubondha.

4 Feb 2012 - 5:59am | editor
Stages are set to hoist the Guwahati International Film Festival from Sunday in Guwahati. The event is set to end on February 11. It is expected to provide movie lovers an opportunity to watch...