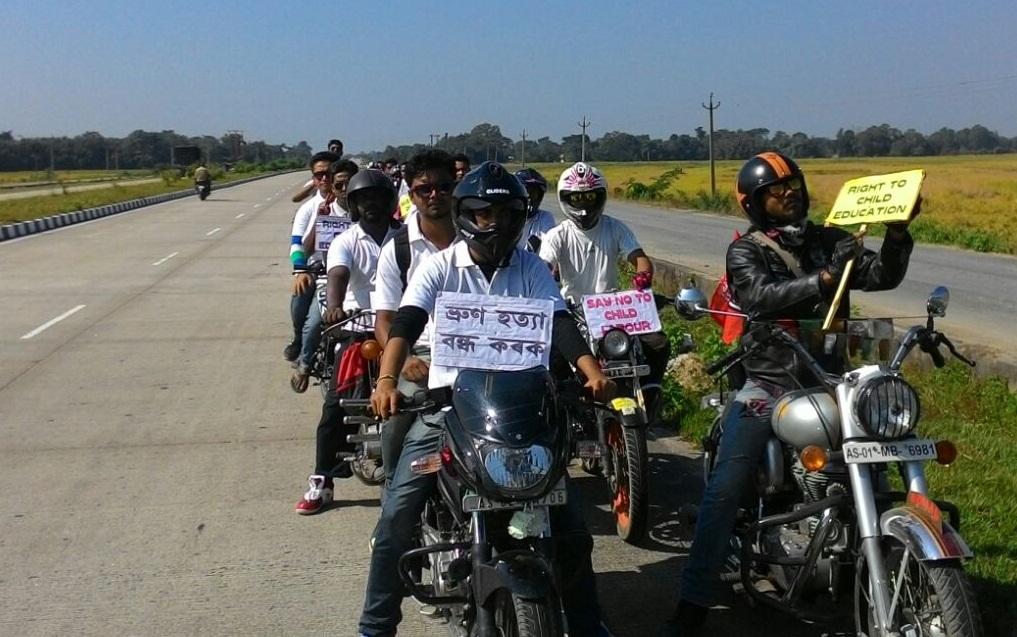 A  group of 30 youths of Bikers’ Association , Raha on Saturday on the occassion of children day , set off on a bike rally to promote gender equality and spread the message of saving the girl child , to Akashiganga, a tourist spot located between Nagaon and Karbi Anglong district.

The rally, which started from Raha , raised awareness on various social evils such as female foeticide, and child labour.

As  the problem of child labor is a serious matter not only in India but also in other developing countries, the group voiced about the child labour laws need to be strictly enforced by the government. The participants tried to make general public aware of the severe consequences of child labour amd female foeticide.

“ Child labour is a great social problem. Children are the hope and future of a nation. Yet, there are millions deprived children in our country who have never known a normal, carefree childhood ”  a participant said.

"We can't change the mentality of the people but we will try to spread the message of saving the girl child, make people aware of the evil practice of killing female foetuses," said Mrinal Saikia , a participant. The biker participants were from varied backgrounds — from students to businessmen and environmentalists.

Jeherul Hussain, another member, said "Women are seldom allowed take part in decisions pertaining to their own lives. They are denied rights to education, career, health, and mobility. We wanted to convey a message to the society that girls are equal to boys. They deserve respect not neglect. We appealed to people to maintain a male-female balance in the society".

“Besides the awareness, all of us will carry the message of unity and brotherhood among the people of our State and speak with the children of various schools that come on our way to Akashi Ganga “ said Pranab Medhi , a senior rider of the group.

The journey was flagged off by  social worker Dhiren Bora  who said that such an endeavour by the youths of the  Bikers’ Association would definitely aware the people about the rights of children and aware of the fact that a girl child is equally important as a boy child.The flagged off programme was also attended by Dilip Bora and Dimbe Gogoi, two senior citizens of the town.