Arunachal Pradesh Congress Commiitee has denied the news of 21 of its MLA’s camping in Delhi are hobnobbing with BJP. "This is an absolutely baseless allegation having no iota of truth.  We are no less loyal to the party discipline than any other congress legislators or member in the APCC. Our difference with present CLP leader for his undemocratic & autocratic way of functioning cannot be construed as anti-party activity as we had never gone against the party but the incumbent CLP leader, which is within the ambit of internal democracy of the party." thus stated ina  press release signed by seberal MLA's. 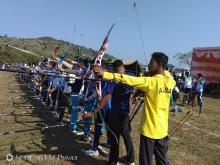