Assam Assam Students Union  carried out Gana Satyagraha in Kokrajhar in protest against NDA govt's policy to grant citizenship and right to stay to Bangladeshis in India today.

Students and common publics from irrespective of students union and communitues in the region took part in the satyagraha and demanded early deportation of Bangladeshis from Assam.

Dipanko Kumar Nath, president of the AASU slammed centre for their irresponsible step while giving right to stay and citizenship to foreigners in India said that the students union will continue it's protest against govt’s policy for the greater interest of the state.

He has demanded early identification of foreigners and deport them to freed Assam from illegally infiltration.He said that illegal immigrants from Bangladesh has been creating resentment among citizens of the state for the dark interest of political parties.

Nath has warned for indefinite agitation against the govt if their demands are not meet in early and Assam should be freedom from any kinds of illegal settlers in the state.

'The students union and citizens of the state are ready to step against foreigners and Assam be checked from illegally immigrants', said Bhattacharya.

The satyagraha agitation with banner, festoone, placards started from Rashmela ground and proceeded to RNB road, Hatimata road and concluded at the same point. 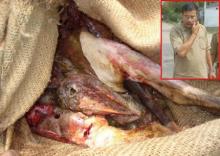 16 Apr 2008 - 3:11am | editor
Police on Tuesday have arrested a high level officer of the state animal husbandry and veterinary department accusing him of killing a deer at the Amchang Reserved Forest. According to information,...

4 Dec 2014 - 8:06pm | AT News
Chief minister Tarun Gogoi on Thursday ordered a probe into the recent incident at Jorhat Medical College where foetuses were found in a dustbin.Gogoi asked pPrincipal Secretary of the health...