The newly inducted council of ministers in the state cabinet who were sworn in on October 16 last have been allotted portfolios today by the Governor of Arunachal Pradesh acting on the advice of the Chief Minister. According to the notification,

Jomde Kena gets transport, civil aviation, Co-operation portfolios three days after he along with two others were inducted in the Nabam Tuki cabinet in Arunachal Pradesh. In a notification, Phurpa Tsering has been given the portfolios of animal husbandry & veterinary, power (Civil).

Tirong Aboh will hold the charges of DoTCL and mines. Meanwhile, Tanga Byaling has got home, power and non conventional resources in addition to horticulture. Health minister Rajesh Tacho has been given the additional charge of parliamentary affairs. 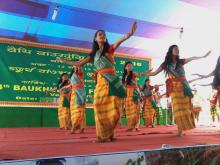 7 Aug 2014 - 6:20pm | AT News
Dispur is hopeful. The impasse over the NHPC project at Gerukamukh will be over. This was how, the Assam reiterated its support to the construction of the Lower Subansiri hydropower project...

31 May 2014 - 10:05pm | AT News
Chief minister Tarun Gogoi has asked the finance department officials to pinpoint the real issues confronting the state to help him prepare a practical budget in June. Presiding over the emergency...