Governor JP Rajkhowa graced the ‘Sampriti’, a cultural presentation of Arunachal Pradesh and Assam at Raj Bhawan on Saturday with a focus on cultural bond.

In his address, he hoped that the event will not only promote the cultural assets of the both the States but also revive the rich cultural heritage. He also hoped that such events will go a long way in strengthening the amity between the age-old neighbours.

Underscoring that cultural exchange programme will provide more understanding of each other’s culture, values and traditions, which will in turn cement good relationship, the Governor suggested that next programme must be in Assam so that artists of Arunachal Pradesh can showcase their rich cultural heritage.

Speaking on the occasion, Chief Minister Nabam Tuki said that Interstate Cultural event helps in cultural integration and at the same time provide exposure to the artists. He added that talented youth will immensely benefit from it. He called for cultural exchange programme in the districts and interior places of the State.

17 Nov 2018 - 10:32am | AT News Guwahati
Guwahati: Journalism is a service to society and the nation. Anyone wanting to make money should not be in the profession. Only those who have the flair, the passion and the right attributes should... 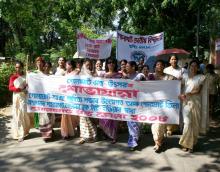 19 Oct 2008 - 4:44am | Ritupallab Saikia
The long wait of book lovers of Golaghat is over as Golaghat Book Fair has opened its doors today. The Book Fair has been organized by the joint efforts of National Book Trust in association with...

29 May 2014 - 11:00am | Jintul Talukdar
In a bizarre incident that sends shocwaves across the state, a villager lost his life at the hands of his wife and son in Barpeta district on Thursday. The incident was beleived to have taken place...