The Bamin Tani Inter-School Badminton Tournament pulled huge crowd when it got off to a colourful start at Multipurpose-Indoor Stadium in Hapoli near Ziro in Arunachal Pradesh on Tuesday. More than 59 participants from 24 Schools around Ziro area have participated in the tournament which will continue till Thursday.

Guest of Honour Ajong Sitek motivated the participants toward importance of games and sport. In his brief address he said, “Winning and losing is a part of game but more important is your participation,” he added. Stating that govt. has already facilitated 10% reservation of job for sports persons, he also highlighted the felicitation of introduced by the govt for sport persons.

16 Apr 2013 - 1:12pm | AT News
A businessman commits suicide in Guwahati after he was upset with business. Identified as S Malow, the gold trader committed suicide a day after gold prices hit 15-month low. He was found dead at his... 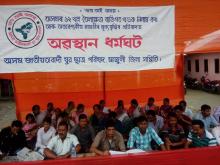