Arunachal Pradesh Chief Minister Nabam Tuki urged the Centre to provide a special window of funding to foster overall growth and development in the state.

The proposal while giving a overview of the developmental journey of the state focuses primarily on projects related to Administrative Reforms, Connectivity, Marketing Infrastructure Linkages, Basic Minimum Services, Border Area Development along with a host of other important issues. He mentioned that the rationale of this proposal was to ensure the completion of several projects which were started under the Special Plan Assistance (SPA) window of the Planning Commission. 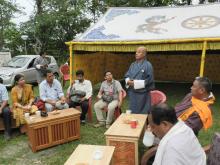 7 Jun 2017 - 9:35pm | AT News Imphal
An explosion occurred near Kasturi Bridge of Thangal bazaar under Imphal Police Station in the capital city this evening, but there were no casualties. The police believed the explosion that...

4 Jan 2009 - 1:43pm | editor
"I am the first woman farmer in my block who started cultivation 15 years back," said 45 years old Aisha Begum Khatoon of Hridaypur village in Ambedkarnagar district. When she picked up the...