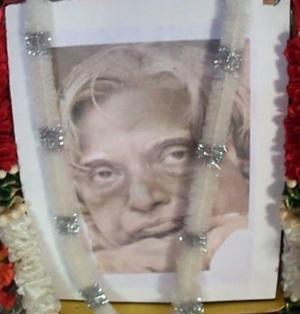 The massive homage for Dr APJ Abdul Kalam seems to have brought an artist to limelight in Lumding.
Popularly known as Gautam Bardhan, the painting artist in Lumding has paid his tribute to the former President with a few drops of his blood.
As soon as he came to know the unexpected demise of the renowned scientist in Shillong, Gautam started drawing a portrait of Dr Kalam with his own blood drops at his home from Monday evening. His task was over on Tuesday afternoon in full view of his friends and well wishers. Then he paid floral tribute to the former president in presence of his friends and fans.

15 Aug 2010 - 12:20am | editor
Tension grips in Sonari a day after some armed miscreants atacked a police barrack built up in in Charaipung bordering Arunachal Pradesh on Friday. According to information, the miscreants, with...