Congress vice president Rahul Gandhi reaches Assam on Thursday to take stock of the flood situation where at least 90 people died and many others rendered homeless.

During his hurricane tour, Gandhi made an aerial survey in the flood hit Lakhimpur and Dhemaji district where the marooned people blamed it all on the NEEPCO owned Ranganadi dam which released excess waters that brought misery got them. 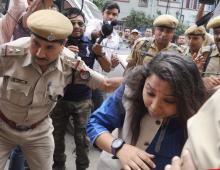 No respite for Rumi Nath

12 May 2015 - 4:09pm | AT News
There seems to be no respite for Rumi Nath as the Gauhati High Court has rejected the Borkhola MLA’s bail plea on Tuesday.After examining the police case diary on Tuesday a division bench of the high...