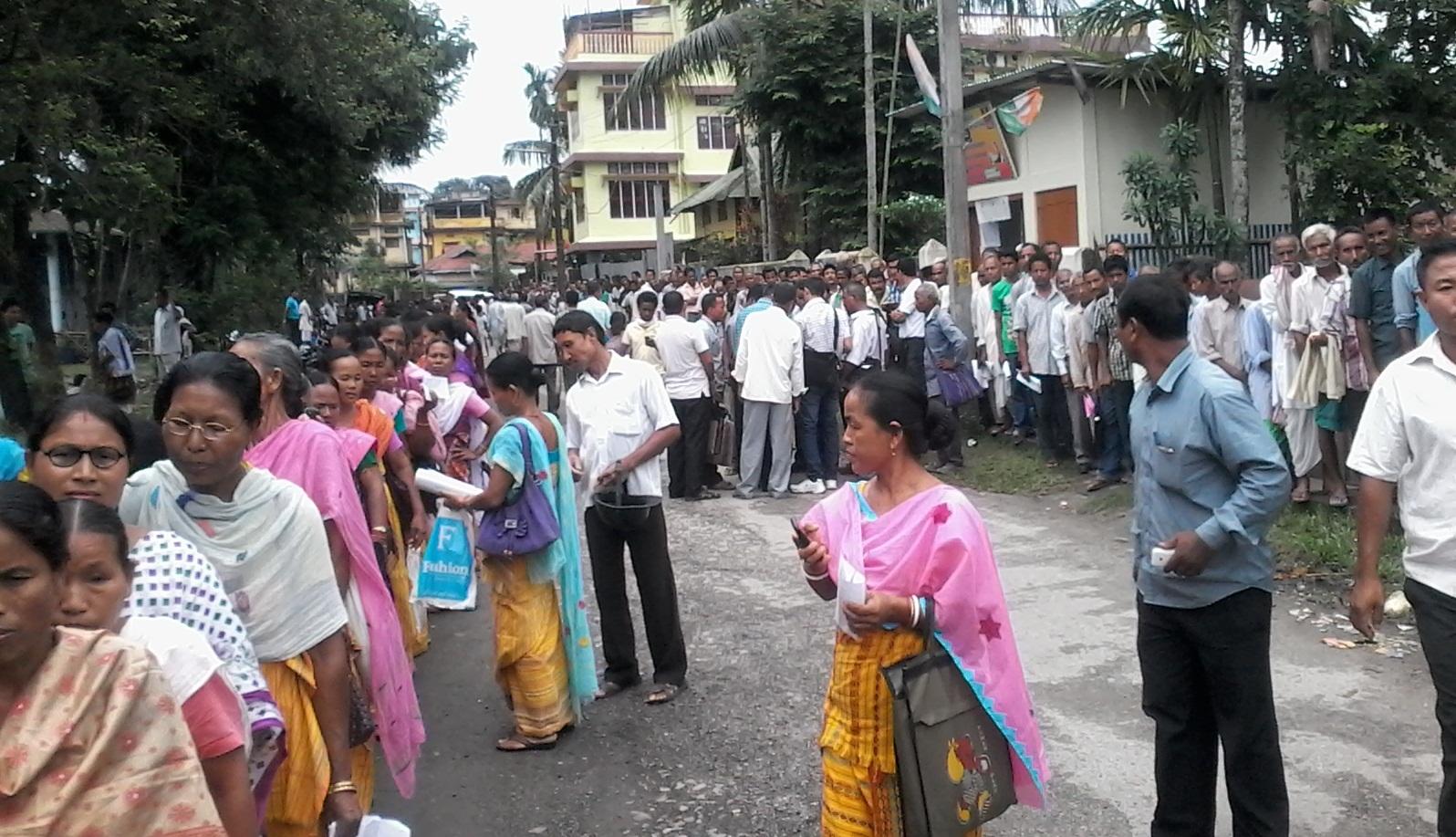 Thousands of volunteers from Sasastra Seema Bal(SSB) who were imparted Internship Training Volunteers(ITVs) and Women Advance Training School(WATS) thronged the Sahitya Sabha Bhawan to get physical verification today in Kokrajhar.

Long queue both from male and female were saw since morning and entered the verification room conducted by SSB authority under Ministry of Home Affairs,Govt of India,sub area organiser,SSB,Bhuyanpara,chairman of Assam camp in Assam state.

The verification has been conducted in Kokrajhar for Dhubri and Kokrajhar district  for two days June 15 and 16 as per order of Director General,SSB,East Block,VRK Puram,New Delhi,Vide No.VI/8/ITVs/SSB/Pers-II/2015/2435-39,dated 27-02-2015 for trained volunteers of ITVs and WATS.

The volunteers who were imparted training since 1962 till 2008 in various levels were not given SSB jobs and hence they seeking intervention from Supreme Court filed petition and the Board of Officers from SSB took verification of Physical and documents during the day.

Most of the volunteers in both category were retired persons who were given training on ITVs and WATS in 1962,1972,1986 and rest are in various session at Haflong and Tejpur centres.

The volunteers expresedd their hope that they would be given proper facilities by SSB authority in their living and their aspirations be made fruitful.

According to volunteers apirations the SSB authority is promising to give SSB jobs who are still have jobs’ age and those who are crossed of jobs’ age be given pension and exgratia awards from concern department.

The verification session was saw in progress across the state following pressure and demanded from All Assam SSB Association and All India SSB Volunteer Association.

There are around 32,000 volunteers across the state who ad obtained training,of which three thousand volunteers are in Kokrajhar and Dhubri district itself.

A female volunteer who had trained in 1972 told that she had imparted in training in Tejpur under SSB for one and half months,but no any job was rewarded since then and today SSB authority is organising verification is a hope of ray of job or pension in life.She expressed her hope that if SSB can complete all these verification it will help in building of financial sound in living.

A male volunteers from Gossaigaon said that he had got training in 1962,but no any job or exgratia was awarded after completion of training and this kind of verification will give ray of new life among training holders.

<p>Please inform me the

Money that was collected from

Permalink Submitted by Anan Tyring on Sat, 23/09/2017 - 10:07
Money that was collected from each volunteer i.e. Rs1400/- and whenever required some amount is charged or asked for official work but for e.g if we calculate the total amount for 32,000 (In Assam only) people that each volunteer had contributed, it will be 32,000*1400=44800000 which is very big amount. So, my question is where does this money goes? Do really the president and his/her members are working for the people or just making money from this issue?

The way of process is good,

Permalink Submitted by Jamatia on Mon, 05/03/2018 - 23:34
The way of process is good, but never stopping to collect money from volunteers. my question... when we will get pension money or exgretia? is this true that the concern dept. will grace upon us?  from Tripura

4 May 2014 - 9:54am | AT News
Two dreaded NDFB-S militants were believed to have been killed at an encounter with army and police in Sonitpur district on Sunday.The incident took place at Paharpur area in Rangapara bordering...

3 Feb 2017 - 10:28am | AT News
The United Liberation Front of Asom (ULFA) is devising a new mechanism to resolve the decade long conflict with the government.Sources close to commander in chief Paresh Baruah told Assam Times that...

6 Mar 2009 - 12:25am | editor
Guwahati Press Club with the support from ERD Foundation, Guwahati has declared a short term fellowship programme to study various aspects of pavement dwellers (primarily beggars) of the city. The...