The brutal gang rape and murder of a 35 years old mentally retarded woman at Kalaigaon has created sensation in the district. According to information, one Alagjan Khatun (35) daughter of Mosarab Ali of Puthiakhat village, under Kalaigaon Police Station had been brutally murdered at Kalaigaon LP School premises on the night of June 13 at 11 PM. She had been subjected to gang rape by two culprits before killing her. Her blood stained body was recovered by Kalaigaon police from the school campus at 11. The dead body was identified by her father at Kalaigaon police station the next day at 10 am. According to her father, she had two sons and a daughter. Her husband, Lalan Ali (45) had left her with all the three children a few years back to marry another woman at Arimari Chapari.

The cold blooded murder of the mentally retarded woman created sensation in and around Kalaigaon. Various organizations including Kalaigaon Mahila Samiti, submitted memorandum to the civil and police administration demanding arrest of the culprits. Dina Mani Das,Circle Officer, Kalaigaon Revenue Circle and magistrate I/C ordered postmortem of the body after spot verification. TR Pegu, SDPO Bhergaon Sub-division;Debajit Deuri, SP, Udalguri visited Kalaigaon to supervise the arrest of the culprits. After vigorous search Kalaigaon police successfully arrested Lasman Basfar,alias Bakuly,son of Raju Basfar of Prafulla Nagar, Mangaldai and Dulu Basak alias Petla, son of Sunil Bask of Kalaigaon. The duo confessed to have committed the crime. According to them, they took the woman to Sigrimari LP School at 10 pm offering her food.The duo also said that they had been under the influence of alcohol at the time of killing and raping the woman. Satyajit Nath, Additional SP, Udalguri requested people to cooperate with police to control social crimes while talking to media persons at Kalaigaon Police Station in the evening of June 14. He assured that police would left no stone unturned to prosecute the culprits, who had been booked under KLG PS case No.34/2011 U/S 302,376,34 IPC.

24 Feb 2017 - 10:13pm | AT Kokrajhar Bureau
A fire & emergency service jawan received injury on his hand due to stone pelted by bandh supporters while rushing to douse tyre burn at Bhawanipur along JD Road in Kokrajhar district on Friday... 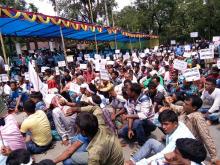 9 Feb 2018 - 2:03pm | AT News
GUWAHATI: The Assam Government on Friday confirmed cancellation of 4 lakh job card which the panchayat rural development department identified as fake. The department officials apprised it to chief...