27 May 2020 - 10:37am | Shajid Khan
UDALGURI: Chirang Police suspended a sub inspector rank police officer serving as Officer-in-Charge of Amguri PS in Chirang district after he allegedly assaulted a doctor and two of his... 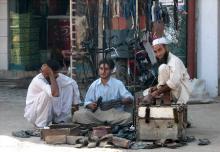 5 Nov 2007 - 10:25pm | Rituparna Goswami Pande
Life came to a standstill in Pakistan with the declaration of Emergency by self styled Pakistan President Pervez Musharraf. His actions reeked more of him being an army chief rather than a president...

21 Jun 2007 - 3:19am | mousumi
Under the initiation of SFI and IPTA, a daylong function was held at Jorhat District Library on 20th June 07 in honour of Bishnu Rabha. The function started with the hoisting of flags of the...