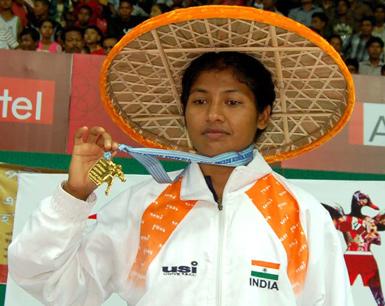 Local girl Kalpana Choudhury made the nation proud by winning the gold medal in the 48 kg category in the Fourth Sr. Asian Women's Boxing Championship which ended at the KNCB Indoor Stadium, Sarusajai, here last evening defeating Ngo Thi Phuong of Vietnam 10-2. Sarita Devi won the second gold medal. Sarita was declared winner on individual score as the points were tied at 5-5 against Ren Cancan of China in the 52 kg group final. The Chinese were on top of the medal tally with 5 golds.Another Indian boxer Nagisetty Usha also won the gold medal in the 57 kg category.

Meanwhile mother of twin children MC Mary Kom and former three time world champion went down to DPR Korea boxer Ok Jong 1-4 in the first final of the day in the 46 kg category. Kalpana hoped that she would be able to win gold in the forthcoming World Championship to be held in China in November next. The championship ended up with a good note apart performance of India was exceedingly better. Assam Boxing Association is hopeful of holding more such events of international event. Talking to this correspondent this morning an office bearer of ABA said that ABA is eyeing at holding World Boxing Championship and expressed happiness over the successful event in Guwahati.

Thai muicians to perform in City

5 Mar 2019 - 12:43am | Aiyushman Dutta
GUWAHATI: Internationally acclaimed fusion-jazz band ASIA7 from Thailand will be performing at the Shri Shri Madhavdeva International Auditorium in Sanardev Kalakshetra in Guwahati on the evening of... 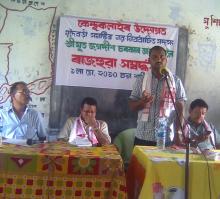