The ruling BPf party today declares 12 nominations in first phase of candidates   for the ensuing council election slated to be held in first week of April next at a special delegate session of the party held at Bodofa Cultural complex in Kokrajhar.

Mohilary also said that his party will announce its second phase candidates by next week in a meeting to be held at Barama in Baksa district.

Assam girl tops in B. Arch

17 Mar 2012 - 9:38pm | Jayanta Kumar Das
Rupalim Choudhury of Assam has topped in the B.Arch (Bachelor of Architecture) from Visvesvaraya Technical University,Belgaum Karnataka,securing gold medal.She is the only daughter of Mukunda Ram... 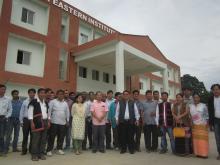 3 Sep 2018 - 9:41pm | Nikhil Mundra
Hojai:-  Thousands of devotees thronged temples in Hojai as Janmashtami, the birth anniversary of Lord Shree Krishna, was celebrated with religious fervour and gaiety on Monday.Devotees in large...