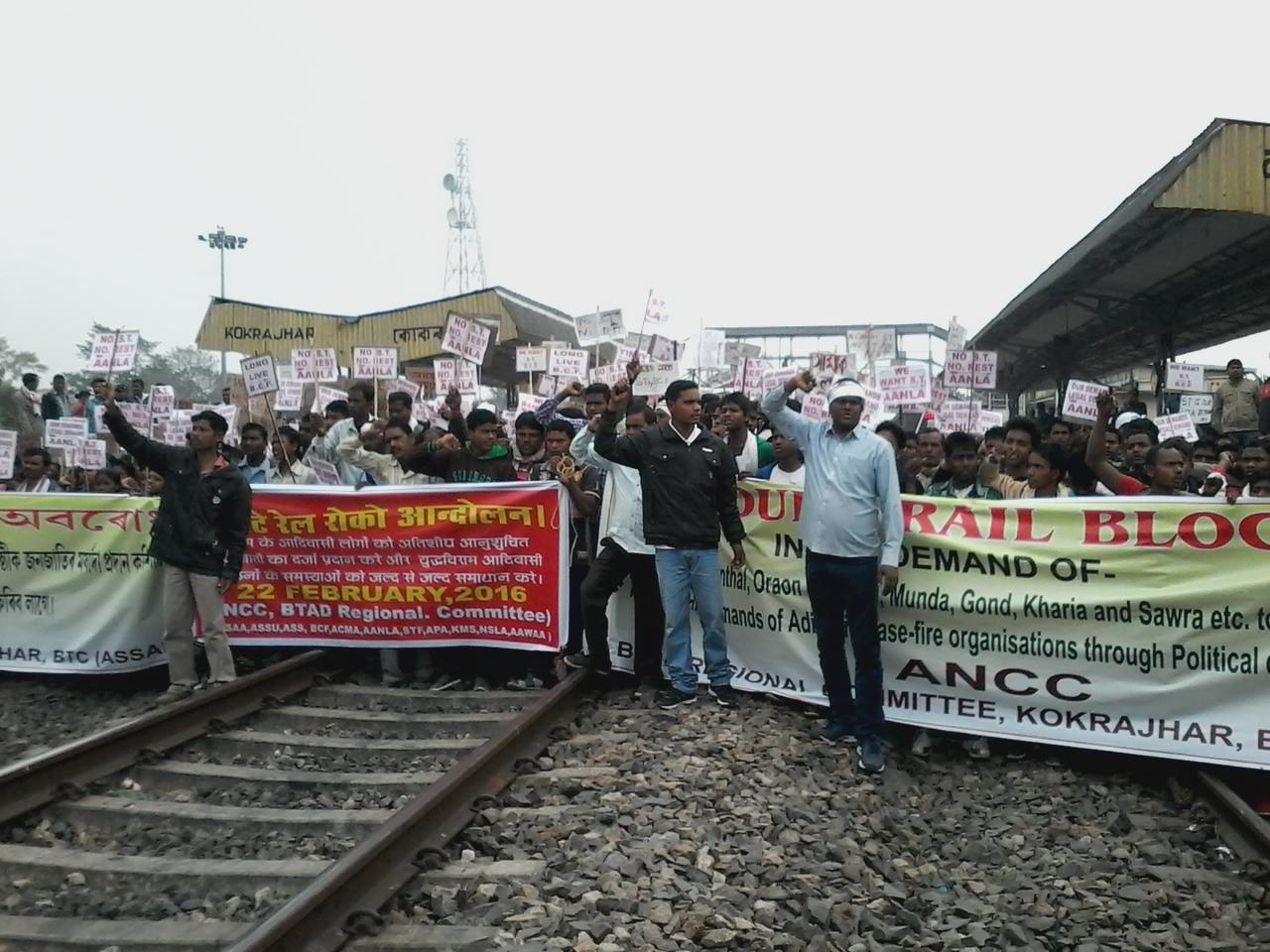 Over ten thousand Adivasis peoples from various districts of Lower Assam which comprises of  Kokrajhar,Chirang,Baksa,Udalguri,Dhubri,Bongaigaon thronged at the rail track with banner, festoon and placards to blockade beginning from 8 am and shouted slogans demanding ST status, early settled of ceasefire groups of the community, which was organized by the ANCC, a conglomeration organization of five militant outfits Adivasis which included Adivasi National Liberation Army (ANLA), Birsa Commando Force (BCF),Adivasi Cobra Military of Assam(ACMA),Santhali tiger Force(STF),Adivasi Peoples’ Army(APA). Several long distance super fast express trains including 12423 down (DN) Rajdhani Express train bound for New Delhi was stranded at New Bongaigaon station of Lower Assam’s Bongaigaon district since morning following blockade, besides several trains were halted at various stations in Lower Assam and some part of West Bengal state. The blockade was later lifted at 12 noon after district administration assured to forward message about demands of the community to the government. The ANCC has strongly expressed resentment over the snail pace of the peace talk and delayed solutions and granting of ST status to the community issues.

Durga Hasda, Chairman of Birsa Commando Force termed the governments that are playing dirty politics over delayed the issues of the Adivasis in Assam.He has slammed both government at Dispur and Delhi have no nay intention to give welfare attitude towards community that is why community are depriving getting of constitutional rights in the state.

Bishing Munda, secretary of ANCC said, ‘The committee compelled to take railway blockade to put pressure the government for granting ST status to Adivasis of Assam ahead assembly election and early solutions of issue and demands of the ceasefire militant outfits of the community’.

The ANCC has also alleged that both state and centre have been politicizing over the issues of the Adivasis since long years. The committee would have compelled to take strong movement if demands are not meet in early manner in coming days. The governments never want change and welfare of the Adivasi community in the state. Community is deprived from getting welfare and development from all fronts of constitutional rights’,Munda said.

Boyel Hembrom, ANCC president and Ambrit Beck, vice president of ANCC and ANLA Commander said, ‘The government has not been any stressed to solve the issue and demands of the Adivasis, that is why the community should have to step to blockade the rail track’.

The govt should take bold step while granting ST status to the community, besides holding peace talk to solve militancy issues of the community ahead Assam assembly election. The leaders also warned for vigorous mass agitation against the government if their demand and issues are not meet early solution.