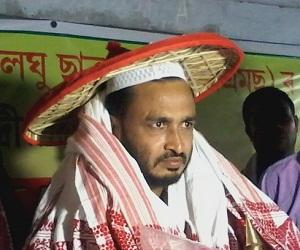 On the participation into upcoming election Ahmed told that he would not contest in the election, but would campaign for the party to make majority winning of the Congress all over the region. Peoples of the state should get good governance and healthy living among society that is why he has decided to join in the party. Ahmed hold twice president of the students union and served to the society.

A general meeting of the students union was organized on Sunday at Bhotgaon in Kokrajhar where delegates from various district committees of the student body participated and accepted the resignation of Ahmed.

The executive committee and different district committees of the students union felicitated Sahabuddin with boukey and phulam Gamocha at a farewell function held at Bhotgaon in Kokrajhar.

27 Jan 2014 - 4:42pm | AT News
Amid widespread resentment over AICC’s move to field UP MP Sanjay Singh in the Rajya Sabha from Assam, Chief Minister Tarun Gogoi said that the party high command has not yet formally allowed him to...