Over ten thousand devotees from 50 dalaisa(branch) of Assam and West Bengal thronged on the concluding day today of the celebration and offered their prayers to the almighty god.

A Biswa Shanti Joghya was performed on the day praying peace and unity across the world among all sections of society.

Dr Shekar Brahma,registrar of Bodoland University graced as chief guest on the open session.Brahma,in his speech said that the Rupamoni Bathow dhwrwm was working to the welfare of the humanity among society and bringing peace and unity since it’s inception.

A new committee of the Rupamoni Bathow Dhwrwm Afad was formed for next three years with Dharani Kanta Narzary as president amd Dhanesh Narzary as secretary in the delegate session of the celebration which was begin from February 20. 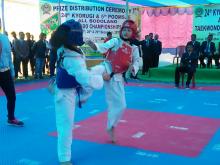 14 districts in clash for Taekwondo champs

28 Dec 2017 - 6:44pm | AT News
KOKRAJHAR: Altogether 14 districts have joined the clash for taekwondo championship in Kokrajhar which is ending on Friday. Rajya Sabha MP Biswajeet Daimary opened the event at Siknajhar Taekwondo...

9 Aug 2017 - 8:17am | AT Kokrajhar Bureau
The Bodoland Territorial Council(BTC )  on Tuesday issued appointment letter to his younger brother and sister of Lafikul Ahmed who was killed by unidentified miscreants a couple...