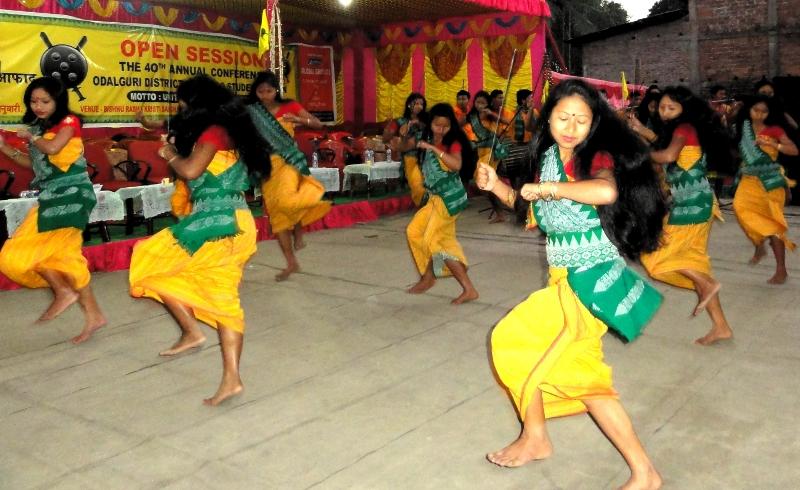 The 40th session of All Bodo Students Union Udalguri district committee has concluded at Udalguri on January 7. Pramod Boro, president of ABSU Assam attended the session as the chief guest on the occasion. On the occasion he said,“Terrorism has no room in civilized human society. The terrorists activities cannot be termed a of the three day annual conference of Udalguri district committee of the premiere students’.The open session was held on the concluding day on January 7 at KBR playground in the heart of Udalguri. He also said “There were instances of terrorism in various parts of the globe which proved futile in the long run “. Hammering on the December 23 inhuman killing of innocent Adivashi villagers in Kokrajhar and Sonitpur district, the ABSU president warned that such terrorists would be isolated from the society and they were not eligible for any form of excuses. Referring to Dr. Hazarika’s epoch making philosophy of humanism in the song ‘Manuhe Manuhor babe, jadihe akano nebhabe…” Boro said that humanity has no colour and we should work for the humanity as human being and it should be shared by all. He also regreteed that even though the Boro community has been surviving for last 5000 years since the age of the Mahabharata, but we have not been able to make positive place in the international arena. However he expressed his satisfaction over the face that now Hari Sankar Brahma Chief Election Commissioner of India designate made the people of Assam and NE region feel proud.

The open session was also addressed by Pushpadhar Sarmah,cultural secretary of Bharatiya Gorkha Parisangh(BGP), Nilokanta Goyary, secretary of Bodo Thunlai Afat among many others. The opne session chaired by Nerkhang Khakhlary, the outgoing president of Udalguri district committee of ABSU was earlier inaugurated by Sadhana Hojai, deputy commissioner of Udalguri district.

The three day annual conference of the students’ organization got underway on January 5 last delegates session at Udalguri Girls’ HS school auditorium while the second day on January 6 last got under way with ABSU flag hoisting by Nerkhang Khakhlary, president of the district committee of ABSU followed by Martyrs tomb inauguration by Rabindra Mochahary, adviser of ABSU and homage ot Bodofa UN Brahma by Louish Mochahari, publicity secretary of ABSU, releasing of Khobai, the souvenir published by the reception committee and open discussion on the topic “ The challenges of students and the common people to cope up with the present trend of the global world.” The open discussion was chaired by Nerkhang Khakhlary, president of UDC, ABSU while it was addressed bya good number of leading academicians from Gauhati University and Bodoland University among many others.In his farewell speech Nerkhang Khaklary,outgoing president of Udalguri district ABSU criticised some electronic channels of Assam saying that Bodo people as a whole must never be accused of violence which had been done by some extremist organisaions and ABSU had always been working for for peace and harmony among all ethnic gorup of Assam.A new 27 member Udalguri district committee of the students’ organization was formed in the last delegates’ meeting held last evening with Daobaisa Boro and Rinjoy Boro as president and general secretary respectively.

Arms and explosives seized in Cachar

4 Mar 2012 - 1:28pm | editor
Security forces recovered a huge cache of arms and explosives in Cachar district on Saturday. These were seized from a house during a joint search operation at Harinadik village under Badarpur...

29 Jan 2008 - 4:54pm | Daya Nath Singh
Army's Red Horn Division organized a public rally on 29 January 2008 at Patharighat in Darrang district, bout 70 kilometers away from the state capital Guwahati, to pay homage to the martyrs, who had...