Assam’s powerful student body All Assam Students Union has demanded Assam Accord implementation minister Dr Bhumidhar Barman’s resignation for his failure to keep his words in terms of the sealing of the porous Indo-Bangla border. Addressing a press conference on Monday, AASU leaders alleged that even after 22 years of signing of Assam Accord, the government has yet to implemented all the clauses of the Assam Accord..

They said as per the tripartite meet held in 2005, the Centre had promised the AASU to seal the Bangladesh border within March, 2007 but the government has gone back to its words till March 31, 2008.

Elaborating these, AASU president Sankar Prasad Ray and general secretary Tapan Gogoi said these include holding meetings on the Assam Accord implementation in all the districts and a massive public rally at Guwahati to discus the foreigners’ problem and a meeting with the representatives of all the ethnic communities on the same issue.

16 Jul 2010 - 6:59pm | editor
Police on Friday have arrested two youths near Guwahati charging the duo with killing a minor boy hours after they kidnapped him. According to information, the body of Kundan Das of Dharapur was... 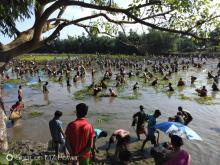 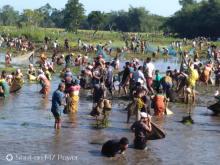 7 Nov 2019 - 9:13am | AT Kokrajhar Bureau
Kokrajhar: A sea of humanity is seeing along the Samoka Irrigation sluice gate River bank to participate in the community fishing near Bishmuri in Kokrajhar district on Thursday. The community...