MLAs Ranjit Kumar Das and Jadob Deka arrived in Chetiagaon and talked to the top civil and police officials to take stock of the situation in the wake of the clash.

The authorities apprised the duo of the measures to contain the situation. /

21 Apr 2009 - 1:16pm | editor
Assam Election Watch (AEW), an organization monitoring the 2009 election candidates, has come out with the analysis of contesting candidates during phase I and II of the elections. AEW looked at... 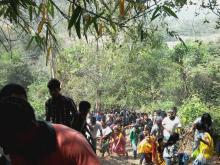 13 Apr 2016 - 6:37pm | AT Kokrajhar Bureau
The fourth Baukhungri festival was concluded with two-day colourful programme scheduled here at Harinaguri, 10km east of Kokrajhar town along the Baukhungri Hill in Kokrajhar district on...