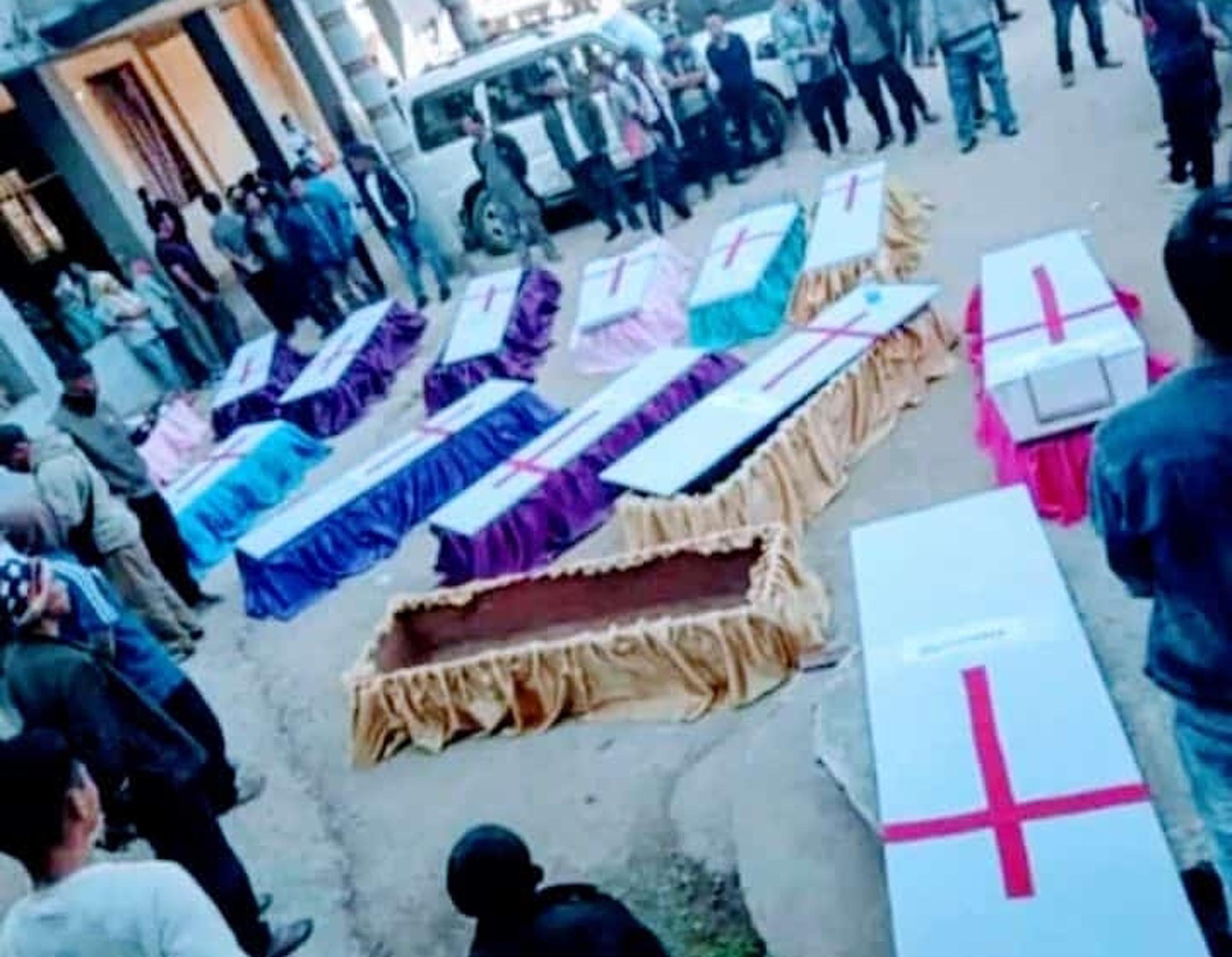 On the evening of 4th December around 1610 hrs, where 08 (eight) villagers were returning home from coal mining work at Tiru in a Pickup Truck, they were =bushed and killed by Security Forces (reportedly, 21 Para Special Force based in Assam ) at random, apparently without any attempt for identification. They were all unarmed civilians working in the Coal Mines in Tint valley and possessed no arms travelling in an open Mahindra Pickup truck in broad daylight but were fired upon and six of them were killed on the spot and two critically injured. This incident happened some few Kilometers away from Oting village.

On hearing the gunshots, the villagers went to the spot being apprehensive that the individuals did not return home from work. On reaching the spot, they found the Pickup truck and the Special Forces Personnel trying to hide the dead bodies of the six villagers by wrapping and loading them in another pickup truck (Tata Mobile) apparently with the intention of taking the dead bodies to their base camp.

On finding the dead bodies in the Tata Mobile, under a tarpaulin. violence broke out between the villagers and the Security personnel. Asa result, the irate villagers burnt 3 (three) vehicles belonging to the Special Forces Personnel. In the melee, he security personnel again opened fire against the villagers which led to the death of 7 (seven) more villagers and eyewitnesses have confirmed that the Special Forces Personnel opened fire indiscriminately as they fled from the scene towards Assam side even firing in the Coal mine hutments on the way.

On the secured crime site. there are a total of 5 (five) vehicles, viz, I. "Ilse Mahindra Pickup in which the civilians were ambushed; 1 One burnt Scorpio; 3. Burnt Bolero; 4. Burnt Tata Winger, and 5. Tata Mobile (not brunt but damaged). Altogether, 13 (thirteen) civilians were killed on that day and seriously injuring 14 (fourteen) civilians and 8 (eight) civilians with minor injuries. Two of the seriously injured persons were taken to Assam side by the Security forces themselves and are now admitted in the ICU at Dibrugarh Medical Hospital.

Report on the  December, 2021 Incident in Mon Town

On 5. December, 2021, the Konyak Union had announced for a mass funeral service of the 13 (thirteen) deceased civilians at the Helipad, Mon town, whose mortal remains were brought there from Oting village. However, the programme was postponed to 6. December, 2021 at 10:00 A.M. but no such clear announcement was made regarding the postponement. This confusion led to the crowd getting agitated and a section of the public started marching towards the District Hospital and Konyak Union office whereby, they vandalized the KU office. Thereafter, the agitated crowed proceeded towards the 27. Assam Rifles post located at Thamnan Ward.

The mob then reached the periphery of the camp and got violent, throwing stones, vandalizing properties and setting fire to three buildings within the Post. The Assam Rifle personnel resorted to blank firing which agitated the mob further.

The District Administration and Police Officials tried to reason and pacify the mob but was outnumbered by the mob which by then, gathered to around 600¬700 people armed with sticks, pipes, flammable fluids and few of them had machetes or daos. After almost an hour into the melee. the second round of continuous firing by the Assam Rifles resulted in the mob running for safety and protection. After the firing ceased, one protestor by the name of Shri. Leong of Chi village, was confirmed to be dead on the spot and 6 (sit) others sustained bullet wound injuries, including one IR personnel of 11th IRB, Aboi, who were shifted to District Hospital.

At the time of filing of this report, Prohibitory Orders under CrPC Section 144 has been clamped in Mon town to control the situation. The situation continues to be tense and volatile.​ 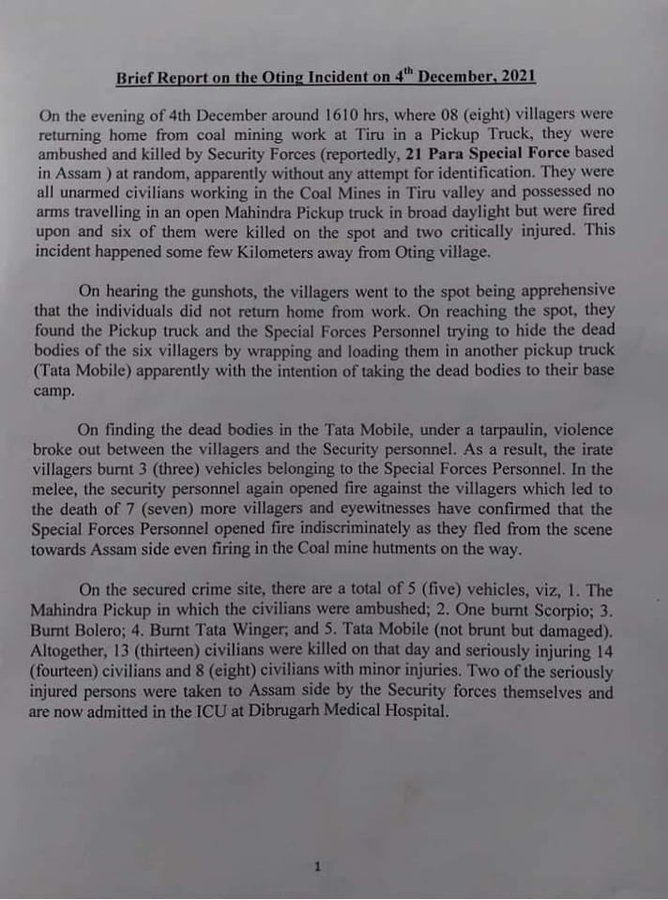 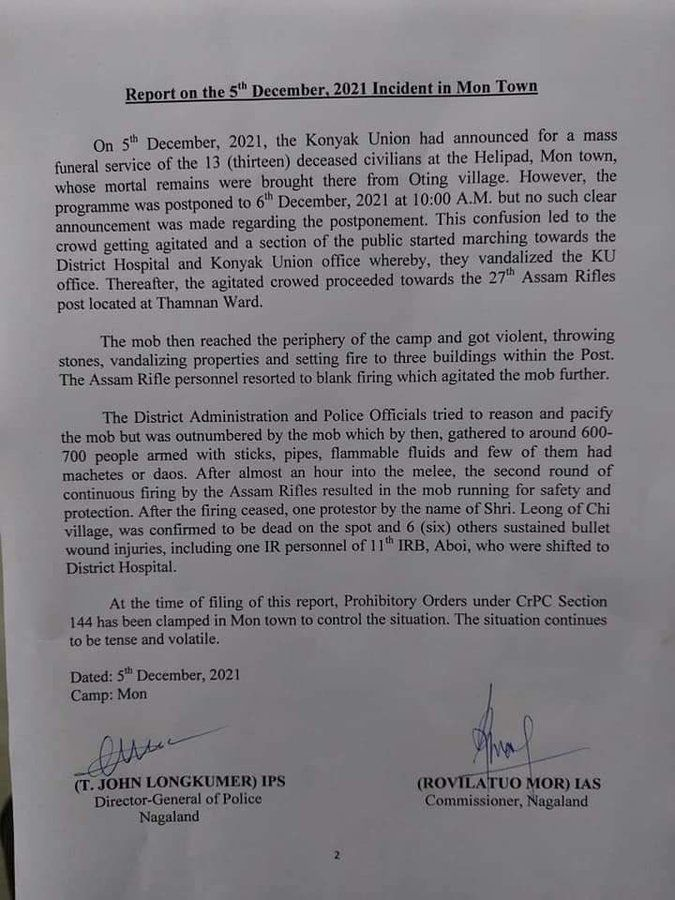 5 Oct 2015 - 8:55pm | Jackson Tayeng
Amid an undying controversy over the Chakma-Hajongs refugees, the All Arunachal Pradesh Students Union (AAPSU) has accused the political parties of trying to extract political mileage and thereby...

6 Nov 2007 - 6:54am | SK Hasan
Historic Dhudor Ali, which was constructed during the the Ahom King Godadhar Singha, covered almost all Districts of Upper Assam, from Komargaon to Joypur, is now in a deplorable condition since last...