It is a mysterious condition that a 18-months-old male baby has been suffering of Hirsch Sprang disease following economic unsustainable of family to operation on his stomach which was made unnatural by doctors.

According to Pratika Brahma, mother of  Bwhwilu Brahma of Bongsijhora village under Kazigaon subdivision in Kokrajhar has been suffereing of Hirsch Sprang disease since his birth.The baby was given his first treatment a local doctor, later refered to Kokrajhar RNB civil hospital and in the long run admitted to Guwahati Medical College and Hospital for better treatment.There are three times operation have already conducted over his disease,but it has yet  to get final cured.

The family is coming out of economic suffered as his father Biswaram Brahma is daily wage earner and can’t incurred anything to provide medical treatment, so nowadays mother Pratika has been bent her step door to door of kinded hearted and well wishers for her son medical aids. After Pratika’s approaching, former minister and Kokrajhar east MLA Pramila Rani Brahma has expressed to take responsibility of treatment of the baby and wished early recovery of the baby.

Pratika said that she has admitted her son in GMC and operated him in the hospital and final operation was to be done in October last,but due to financial difficulties,the operation has yet to be done.She has move door to door of kind heart peoples to get financial support and MLA Pramila Rani Brahma has assured to help medical incurred during operation.She also told that she has decided to admit her son by first week of February next.She has expressed with family financial hardships tearful on her eyes appeals to extend help from kind heart and well wishers to recover her son from disease.Anybody,if kind heart and well wishers want to contribute financial support,they may can contact  at 8471972960/8134836724.

Pramila Rani Brahma told to this correspondent that the baby, who is suffering from critical condition as his family can’t support any more treatment.She said she will extend treatment incurred for the baby by the first week of February next. She also appeals to donate economic from rich kind heart and well wishers, who are in sound economic status.

Dr  Anmol Kumar Sah,Surgeon of Kokrajhar RNB civil hospital said that this is a Hirsch Sprang disease and it is curable.The baby has been giving medical treatment at GMC. 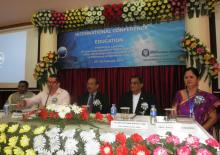