The Peoples Co-ordination for Democratic Right(PCDR), floated as new non-political organisation among the society to building a equal distribution,corruption free, ensuring safe and security,peace and harmony all sections of community in the state on Thursday in Kokrajhar.

The right was formed with Rwn Gwra Narzary,ABSU adiviser as chief convenor along with other 11 convenors at a special convention held at Bodofa Cultural complex in presence of represetatives from various political and non political organisations,was organised by ABSU and its allied organisations.

Promod Boro,president of ABSU said that the democartic right will work for the upliftment of the social integration among all sections of the society.He said that peoples of the region are afcing several hardhsips like killing,kidnaping,extortion due to the security failure from government.The right will voice for peoples unity as well unity among society.The right will  raise voice for the solutions of various community issues including Bodo and other communities in the state,he said.

Boro said the right will work for the equal distributions of social right and society should be led in corruption free manner to meet healthy governence,besides these the right will go forward to create healthy and integreted  society in the region.The right is a completely non political organisation where all non political ad plotical can join and cooperate in building united society.

Boro alleged that present rupling government has totally failed while proving safe and security and property of the common publics.He has demanded early seized of illegal arms from ther society and held good governence in the state.

Boro condemnded the killing of Manaj Das of Mushalpur late last evening in Baksa and demanded eraly arrests of involved culprits.He has asked government to atke stern action against anti-social activities which are creating resented among society. 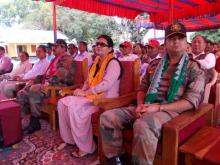 16 Apr 2012 - 5:15pm | Jayanta Kumar Das
Taking forward the Indian Army’s drive to reach out the local populace and benefit the needy, Red Horns Division made yet contribution towards education at Bhergaon ME School in Udalguri on 10...

10 Oct 2016 - 2:42pm | AT News
Durga puja fever still grips Assam as the annual Hindu festival enters fourth day on Monday. Puja pendals in the nook and corner of the premier north eastern state are teeming with devotees of all...