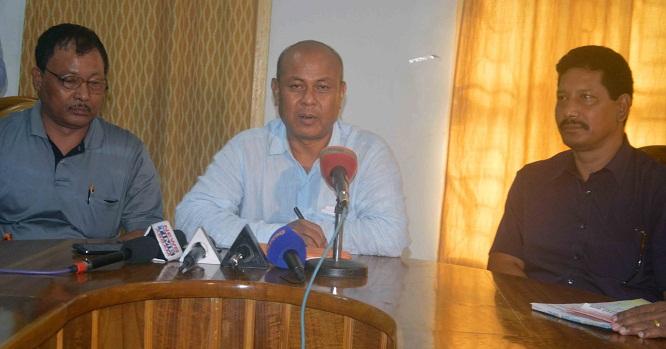 The Bodoland Peoples Front(BPF), ruling partnar with Congress in Assam has broke down long eight years alliance due to the negligence from the alliance partnar Congress party itself today.

The BPF party has 12 MLAs including a cabinet minister,two Parlimentary Secretaries and  a chairman post in the state,has withdrew their supports to the Congress in Dispur which has been partnar with Congress since 2006 for second consecutive terms in Assam.

Talking to reporters at PWD Guest House, BTC Chief Hagrama Mohilary said that the people of the BTC area were deprived in all fronts due to non-co-operation of the state government.

“It’s meaningless to stay in the government as the ruling Congress could not protect the life and property of the people in BTAD”, he said.

Mohilary, who is also the BPF President, said that the extortion, killing, and kidnappings have not declined in the BTAD area which has affected the BPF party very badly being in the government. He urged the Assam Transport and Tourism Minister Chandan Brahma, Parliamentary Secretaries Maneswar Brahma,Rakeswar Barhma and Rihan Daimary, Chairman of Assam state ware housing board and MLAs taking portfolio in the Assam government to resign by tomorrow.

The decision of withdrawing from the government was taken at Policy Making Body (PMP) meet on June 24.

Mohilary also they were deprived from all front. He said year fund allocation as per population pattern(12.9%) were never allocated to BTAD region.

When asked if the announcement of withdrawing support came after descendant in Congress leadership, Mohilary said ‘it is not connected with the development in Congress.

Today, the meeting was held on the acceptability of the PMB decision where Assam Transport and Tourism Minister, etc. Chandan Brahma, all the BPF MLAs, EM s were present and took the final stand on withdrawing the alliance with the Congress.

He said that the ST, SC and OBC communities in BTAD were the most sufferers as the fund allocated to them was not sanctioned from the Assam government since the year 2005. Mohilary said that the issues were discussed with the Officials and respective Ministers in the state but in vain.

The BTC Chief also pointed out that there needs some amendment in the BTC Accord for the Panchayati Raj in the 6thScheduled areas.

He said that the people of the BTAD region were deprived of the Panchayati Raj.

Mohilary said that in lieu of the Panchayati Raj, BTC proposed Village Council Development Committee (VCDC) but the Assam government did not approve. He hoped that the July Session of the Parliament will make some amendment in the BTC Accord for the Panchayat system in the BTAD. Mohilary also said that in such amendment of the 6th Schedule the NC Hills and Karbi Anglong will also get the benefit of Panchayati Raj system.

MLTR to rock Guwahati on Dec 13

12 Dec 2015 - 10:09pm | Anamika Dutta
After waiting for more than a decade, Guwahati witnesses the first mainstream International act of Michael Learns to Rock (MLTR) on the 13th of December at Sarusajai, Guwahati, where they will...