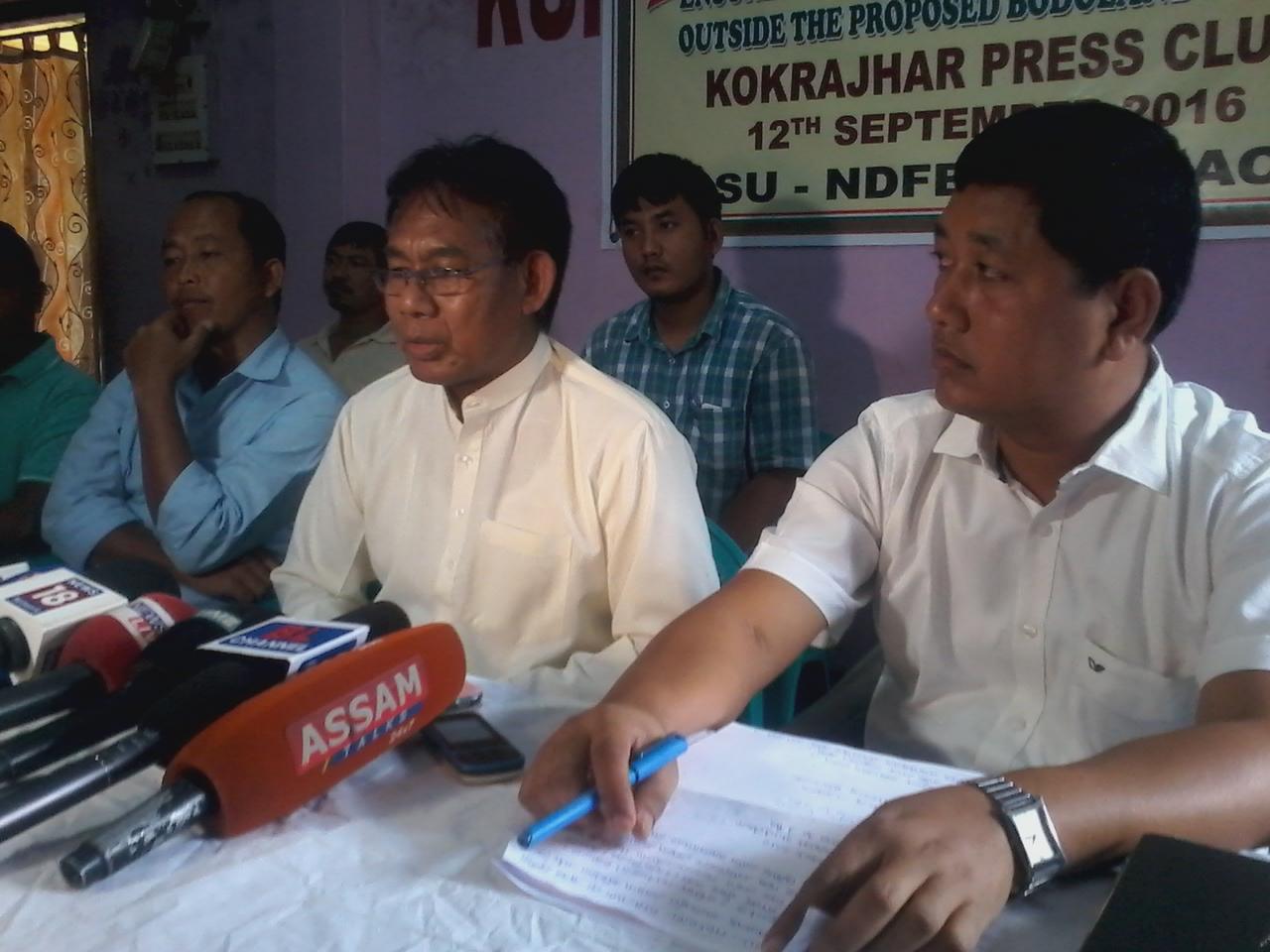 The National Democratic Front of Boroland-Progressive (NDFB-P) slammed BJP led NDA government for not taking any initiative while bringing issues of Bodoland separate and NDFB issues as militant outfit has been ceasefire since 2005 to meet permanent peace in the state.

Speaking the reporters at a press conference held at Kokrajhar Press Club in Kokrajhar on Monday, Gavinda Basumatary(B Swmkhwr),General Secretary of NDFB(P) said the NDFB(P) and its allied organizations will be continued mass agitation till achieve of separate Bodoland state under Article 2 & 3 of Indian constitution. He said that Congress led UPA government hold several rounds of tripartite talk on Bodoland and NDFB (P) issues during their tenures, but BJP led NDA government at centre did not hold peace talks on their two-years of government since 2014 last.

BJP party had promised to full fill demand and issues of Bodoland issue during 2014 parliamentary elections, but till today no any response was reach to the demand and aspirations, he said. He has warned to take vigorous mass movement to the cause of Bodoland and solution of NDFB (P) issues, for which militant outfit reached a ceasefire with government in 2005.

He expressed dissatisfaction over snail pace of peace talk with government over Bodoland issue said that government should take stern measure to solve long standing demand of separate Bodoland issue. He urged government to avoid dictatorial attitude while dealing agitation situations in the state. He also declared more agitation scheduled to put pressure government to create separate state Bodoland within Indian constitution. He said that ABSU, NDFB (P) and PJACBM called 6-hours business establishment bandh on September 19, 7-hours motor engine bandh on September 30 and 12-hours rail blockade on third week of October next to the cause of Bodoland issues.

“We reached ceasefire with government since 2005, yet final solution was to be reached in its reality. Several rounds of tripartite talks were hold on Bodoland issue during UPA tenure, but in BJP’s led NDA government, no single round of talk so far invited to the issues”, Basumatary added.

Lawrence Islary,General Secretary of ABSU said that the government has not been taking any step to solve issues of Bodoland state and NDFB(P) problems from their end.He has demanded immediate solution of Bodoland demand issues for permanent peace in the region.

21 Feb 2012 - 2:03am | Nava Thakuria
The Assam Tribune Employees Union (ATEU) has appealed all the media house owners to provide legal dues to the journalist and non-journalist media employees such that they can maintain decent lives....

13 Mar 2014 - 5:34pm | AT News
RAJU BARUAH FROM TEZPURAll of a sudden trouble seems to have brewed in Tezpur AIUDF.The Sonitpur AIUDF makes it plain and simple that they are all prepared to resign in rank and file if the party...