Chief minister Tarun Gogoi on Monday found it very shocking when he visited the Narayanguri in Baksa where armed miscreants killed at least 20 people a couple of days back.

Gogoi arrived in Narayanbari area at 11 in the morning by a helicopter and interacted with the victims’ family members one by one.

The refugees, mostly, broke down in tears when they narrated the nightmare before the chief minister in the refugee camps.

He exclusively talked to three children who lost their parents at the hands of the miscreants in full view of them. “ Its very shocking,” told the chief minister to Dr Nazrul Islam and Rockybul Hussain.

Three of the refugees named forest officer Rajen Boro who was involved in the massacre. All they demanded arrest of Hagrama Mohilary, Khampha Borgayari and Pramila Rani Brahma alleging their direct involvement in the carnage.

17 Jul 2007 - 4:18am | editor
GUWAHATI: Caught in a Catch-22 situation, Assam Chief Minister, Tarun Gogoi, is willing to hand over the probe into the killing of Phul Chand Ram to the CBI but has said that this will not stop the... 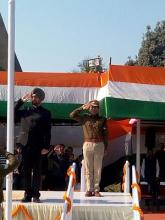