Three persons who sustained serious injury in Barpeta lightening on Saturday are battling for life at the Gauhati Medical College Hospital.

At least fifteen others have been undergoing treatment at the Barpeta Medical College Hospital who are out of danger.
The boat carrying more than 50 people was caught in a storm in the middle of the river Beki where the lightening struck on it leaving seven people died on the spot.

8 Oct 2008 - 2:17pm | editor
Two more persons were killed at Dalgaon in Darrang district in police firing for dispersing an some miscreants on Tuesday midnight.According to information, the incident took place at Chahgaon around...

3 Oct 2015 - 8:07pm | Hantigiri Narzary
The Adivasi Mahasabha enters third day at the Magurmari High School ground in Kokrajhar on Sunday. The Mahasabha held its delegate session on Saturday with Wilfred Topno as president where the... 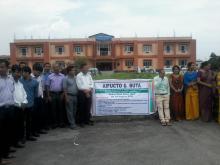