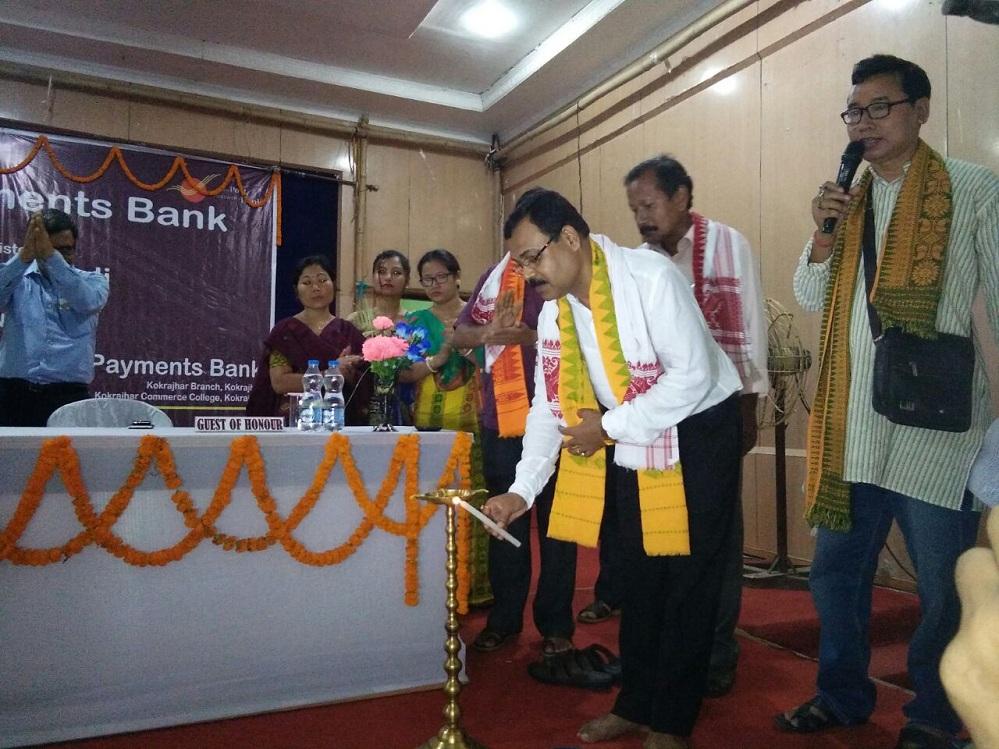 Kokrajhar: Along with rest of the state, India Post Payments Bank (IPPB) is also launched in Kokrajhar today at a programme held at Commerce College auditorium.

Dr Debnath while lauded the India posts payments bank venture initiated by Department of Posts to connect citizens with banking system across the country. He said that IPPB will give an opportunity among society to make awareness on economically run in healthy manner and financial gaining up.

Superintendent of Posts for Goalpara division, Dhubri Ratul Sarma while talking to the reporters on the occasion said the bank system will connect to the rural area citizens. He said peoples are getting bank facility at the rural areas and involved IPPB will be availed at the rural areas to dedicate bank services. He informed that postmen are touching all rural peoples with necessary initiatives. The posts are working for the welfare and banking facilities with proper communication. The IPPB will provide all concern facilities which are providing in the banks in the country. The launching payments bank will be benefitted for the citizens in the state,Sarma said.

‘We do hope that the newly launch India posts payments bank will be giving a new ray of hope in connecting with banking system in the state’, he added.

2 Dec 2008 - 9:40pm | Monjib Mochahari
Enough is enough; terrorists have killed more than a thousand people since the UPA government came to power in 2004. Despite repeated terror strikes in almost all the major cities of the country, the...

5 Oct 2015 - 8:02pm | Siddhartha Handique
Debraj Roy College in Golaghat is organizing a two days national level seminar on changing scenario in teaching-learning and evaluation system of higher education on October 31.To be sponsored by...

9 Jan 2018 - 8:49pm | AT Kokrajhar Bureau
Kokrajhar, Jan 9: President of the All Bodo Student's Union (ABSU)  Promod Boro coming down heavily on BTC chief Hagrama Mohilary over his remarks on ABSU working to the community welfare...