5 Nov 2015 - 7:33pm | Hantigiri Narzary
Kokrajhar DC reviewed the ongoing process of verification of application forms and documents submitted by the public for inclusion in NRC in Chirang district on Thursday. Deputy Commissioner,Chirang...

20 Jan 2018 - 8:49am | AT News
GUWAHATI: A 5.2 magnitude earthquake struck massive panic in Assam early in the morning on Saturday. Originated at Gauripur in Dhubri, the tremor jolted the entire state at 6.45 in the morning... 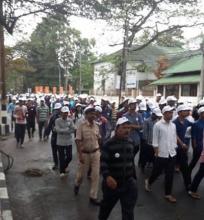