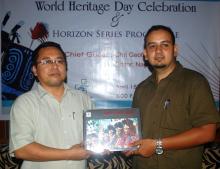 24 Apr 2011 - 10:26pm | editor
Like other parts of the world, World Heritage Day was celebrated in the Northeast as well. The North East Zone Cultural Centre (NEZCC), under the Ministry of Culture, organized a cultural performance...

25 Aug 2019 - 10:46am | AT News
This is an invitation for papers. Concept Note of the Seminar Role of Religion in Peace and Conflict Processes in Northeast India Organiser: North Eastern Social Research centre, Guwahati 15th...

4 Mar 2019 - 10:44pm | CM Paul
A priest social worker who has worked in northeast India for some 40 years has come up with a photo journal of his photographic collection chronicling the life and culture of Mising tribe among whom...