16 May 2013 - 8:44pm | Abdul Gani
Three teams of school children from Assam – two from Nagaon and one from Tezpur in Sonitpur district – have made excellent presentation in a global teleconferencing coordinated by the civil... 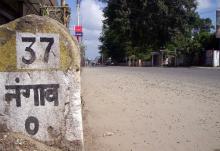 1 Nov 2008 - 9:25pm | editor
After the serial bomb blast at various places of Assam,various organisation has decided to protest against the government's failure.The blast was so devastating that it can be termed as Bloody...

11 Jun 2008 - 2:28pm | editor
In yet another staggering blow, Army has killed three more top ranked ULFA cadres at an encounter on Tuesday night in upper Assam’s Dibrugarh district. According to information, acting on...
Follow @Assam Times