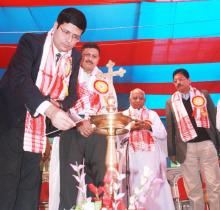 Polling ends, eyes fixed on May 16

12 Apr 2014 - 7:09pm | AT News
Voting in Diphu, Silchar and Karimganj ended peacefully. Now the eyes are fixed on May 16 when the counting of votes would take place from 8 in the morning.Barring a few complaints of EVM malfunction...