Chief Minister Tarun Gogoi gave away Madhabdev Award to Mrinal Miri at a function in Narayanpur district on Sunday.

In his address, Gogoi said that his government would do everything possible to honour the vaishnavite saint. After receiving the award, the noted educationist stressed need to go for value based culture to save the future Assam. 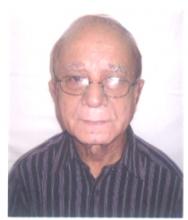 4 May 2016 - 11:31am | AT News
Senior journalist of northeast India and a member of Guwahati Press Club, Naba Sarma (79) passed away on 3 May 2016. Sarma, who worked both in regional and national media outlets, breathed his last...

28 Oct 2010 - 10:27pm | editor
Black cats will stay with Prafulla Kumar Mahanta. This is Gauhati High Court's instruction. Hearing a petition moved by the former chief minister on Wednesday, a single bench of the court on...

19 Mar 2015 - 1:14pm | AT News
The emergence of one after another political party seems to have changed the political landscape in Assam a year ahead of the assembly polls. It would hurt AGP and BJP’s poll prospect which is enough...