Chief Minister Tarun Gogoi has asked Chief Secretary PC Sarma to probe into the matter as to why Assam tableaux is not being put in this year’s Republic Day function in New Delhi and submit the report forthwith.

According to sources, Mr Gogoi has taken the matter seriously and asked the Chief Secretary to probe into the matter to find out the lapses, if any, and to fix responsibility on the officials concerned. 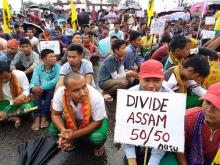 14 Nov 2015 - 5:51pm | AT News
The tribal bodies in Assam are contemplating to hit the streets opposing the move to accord ST status to 6 ethnic communities. No organization has openly disclosed the disappointment. But they would...